China says it is helping Africa develop, not pile up debt

TEHRAN, September 04 - China is helping Africa achieve development, not accumulate debt, a top Chinese official said on Tuesday, as the government pushes back against criticism it is loading the continent with an unsustainable burden during a major summit in Beijing. 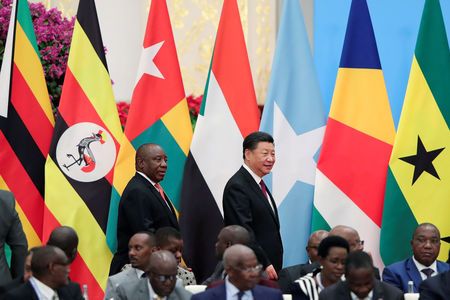 TEHRAN, Young Journalists Club (YJC) - Chinese President Xi Jinping on Monday pledged funds of $60 billion to African nations at the opening of the Forum for China-Africa Cooperation, matching the size of the financing package offered at the last summit in Johannesburg in 2015.

A wave of African nations seeking to restructure their debt with China has served as a reality check for Beijing's relationship with the continent, though most countries still see Chinese lending as the best bet to develop their economies.

"If we take a closer look at these African countries that are heavily in debt, China is not their main creditor," China's special envoy for Africa, Xu Jinghu, told a news conference.
"It's senseless and baseless to shift the blame onto China for debt problems."

China would carefully choose projects that avoid causing debt problems when pushing forward with Xi's pledges to Africa, she added.

"When we cooperate with African countries we will conscientiously and fully carry out feasibility studies, to choose which projects can go ahead. These projects will take into account their development prospects so as to help African countries achieve sustainable development and avoid debt or financial problems."

China is helping African countries achieve development not accumulate debt, Xu added, describing debt overall as a burden that has built up over a long period of time.

"We need to take into account the fluctuations of the international economic situation which has raised the cost of financing for these African countries and most of them depend on exporting raw materials, the price of which on the international market has been falling," she said.

"All these have added to the debt problem of African countries."

China has denied engaging in "debt trap" diplomacy, and Xi also said that government debt from Chinese interest free loans due by the end of 2018 would be written off for the poorest African nations.