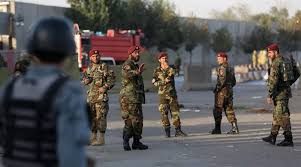 Shahabi said 11 insurgents were killed and 16 others wounded in the gun battle with police.

Three police vehicles were also burned by the insurgents, but police said they were able to regain control of the area.

No one immediately claimed responsibility for the attack, but Taliban insurgents are active in the province and often launch attacks against security forces.

Tabasim said six other police were wounded in Monday night's attack by insurgents.

Zabihullah Mujahid, Taliban spokesman, claimed responsibility for the attack. In a statement, he claimed that fighters took control of the entire district.

Tabasim denied that: "Afghan security forces are in control of the district and the Taliban's attack was repelled," he said. More than 20 insurgents were killed during the gun battle, Tabasim said.