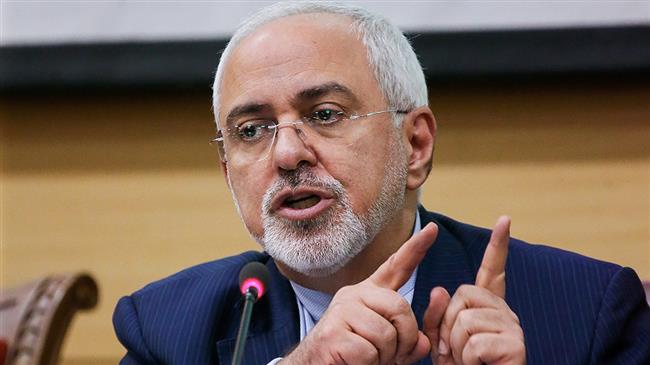 Zarif paid a day-long visit to Damascus on Monday and held talks with the country's senior officials, including President Bashar al-Assad, Foreign Minister Walid al-Muallem and Prime Minister Imad Khamis, as Syria is preparing for an operation to liberate Idlib Province, the last major militant stronghold.

Assad and Zarif said Western pressure on Tehran and Damascus will fail to deter them from fighting terrorism.

In their meeting, the two sides asserted that Western countries would not be able to deter Iran and Syria from defending their principles, the interests of the two nations, and the security and stability of the entire region.

Elsewhere in his Tuesday remarks, Zarif also pointed to his last week's talks with Turkish President Recep Tayyip Erdogan and Foreign Minister Mevlut Cavusoglu in Istanbul as well as a planned summit of Iranian, Russian and Turkish presidents in Tehran and said efforts would be continued to "prevent any damage to the Syrian people and complete the process of clearing extremists."

At the request of Damascus, Iran has been offering advisory military assistance to the Syrian army. Tehran says it will continue its anti-terror mission as long as the legitimate government in Damascus wants it to do so.

Iranian President Hassan Rouhani will host his Turkish and Russian counterparts Erdogan and Vladimir Putin, respectively, on Friday in an attempt to find ways to end the ongoing crisis in Syria.

In response to a question about a claim made by US President Donald Trump that attacking militant-held Idlib would be a “humanitarian mistake” for Tehran and Moscow, Zarif said Trump seeks to take advantage of the situation in Idlib for his own foreign policy goals.

"Americans have not shown a good record of their fight against extremism and terrorism," the top Iranian diplomat pointed out.

Russia also on Tuesday strongly dismissed President Trump’s warning to Syria not to carry out a full-scale offensive against terrorists in Idlib, stressing that the northwestern region is a “nest of terrorism.”

"Just to speak out with some warnings, without taking into account the very dangerous, negative potential for the whole situation in Syria, is probably not a full, comprehensive approach,” Kremlin spokesman Dmitry Peskov said at a press conference in the capital Moscow.

Russia has also been providing air cover to Syrian army operations. It has also military advisors in the Arab country and runs a number of military bases there.

The Russian military has repeatedly reported that the US uses the areas under its control in Syria to provide support to Takfiri terrorists.

On the opposite front, the US – along with Israel and its other allies -- has been backing the militant groups fighting to topple the Assad government.