TEHRAN, September 05 - Hit by the tanking Turkish lira, breakaway northern Cyprus is struggling to fend off a crisis largely outside the control of the isolated enclave, which relies on Ankara for its economic survival. 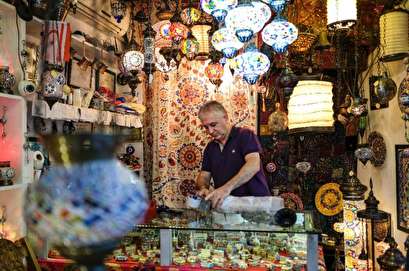 TEHRAN, Young Journalists Club (YJC) - The currency, which has been hammered by market fears over Turkey's economy and a diplomatic row with the United States, has nearly halved in value against the dollar this year.

That has left tiny northern Cyprus, which uses the lira, in a tight spot.

With no control over the value of the currency or interest rates, "it's very, very difficult for an economy like us" to cope with the sudden devaluation, economy minister Ozdil Nami told AFP.

"This crisis is not of our own making."

The northern third of the Mediterranean island has been largely cut off from the rest of the world since 1974 when Turkey invaded following a Greek Cypriot coup seeking union with Greece.

The UN-patrolled "Green Line" dividing the island was only opened to two-way traffic in 2003.

Today Greek Cypriots are flocking across the border to fill up with cheap petrol following the lira's plunge, causing long queues at checkpoints in Nicosia, the world's last divided capital.

The influx is little solace for coffee shop owner Mehmet in the north of the city.

"All of my costs have gone up 50 percent in the past few weeks and my savings have basically lost half their worth," he said.

Meanwhile the cost in Turkish lira of his son's university tuition in Britain has nearly doubled.

"I can manage at the moment, but as the time passes, people won't have the means," said Mehmet, who did not want to give his real name.

Ankara is the only country to recognize the self-declared Turkish Republic of Northern Cyprus, home to around 300,000 people.

Authorities in the enclave have implemented a series of steps aimed at "maintaining the cash flow in the economy", Nami said.

Heavy subsidies on petrol and cigarettes, significant cuts to consumption and property taxes, and incentives for foreign real-estate investors are all part of the plan along with austerity measures.

Ministers and lawmakers have agreed to a 20-percent pay cut for six months, Nami said, and public sector unions have accepted a 15 percent reduction in overtime payments.

But prices in stores are steadily rising and big-budget data-x-items like property, cars and electronic goods -- all priced in foreign currencies -- are now unaffordable for most Turkish Cypriots.