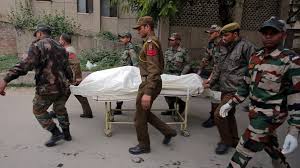 Pakistan and India often exchange fire in Kashmir along the U.N.-designated Line of Control, which serves as the frontier in the region divided between the two nuclear-armed south Asian neighbors.

The two sides signed a cease-fire agreement in 2003 but both often violate it, blaming the other side.

The two nations claim Kashmir in its entirety and have fought two of their three wars over it since they gained independence from Britain.