TEHRAN, September 05 -Scientists who decoded the opium poppy genome say the breakthrough might improve production of the plant to provide a cheap, reliable supply of pain relievers and other medications. 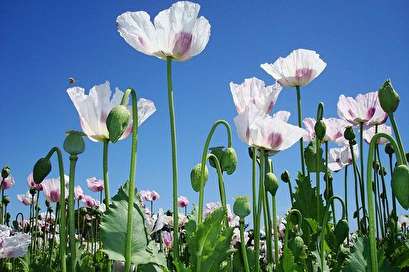 TEHRAN, Young Journalists Club (YJC) -Scientists who decoded the opium poppy genome say the breakthrough might improve production of the plant to provide a cheap, reliable supply of pain relievers and other medications.

The opium poppy is used to make the cough suppressant noscapine, and the painkillers morphine and codeine.

"Biochemists have been curious for decades about how plants have evolved to become one of the richest sources of chemical diversity on Earth. Using high-quality genome assembly, our study has deciphered how this has happened in opium poppy," said Ian Graham, co-corresponding author of the study.

Graham is a biochemical geneticist at the Center for Novel Agricultural Products at the University of York in the United Kingdom.

"At the same time, this research will provide the foundation for the development of molecular plant breeding tools that can be used to ensure there is a reliable and cheap supply of the most effective painkillers available for pain relief and palliative care for societies in not just developed but also developing world countries," Graham said in a university news release.

The researchers noted that plants are able to duplicate their genomes, and the duplicated genes can then evolve to do other things. In this way, plants have developed new tools to make a variety of chemical compounds that, for example, are used to defend against attacks from harmful microbes and to attract species, such as bees, to aid in pollination.

The new research identified ancient genes that led to the first major step on the pathway to morphine and codeine.

The report was published Aug. 30 in the journal Science.