TEHRAN, September 05 -Pro-Palestinian groups across the United Kingdom have expressed concern and outrage over the opposition Labour Party’s decision to fully adopt a Zionist-backed definition of anti-Semitism. 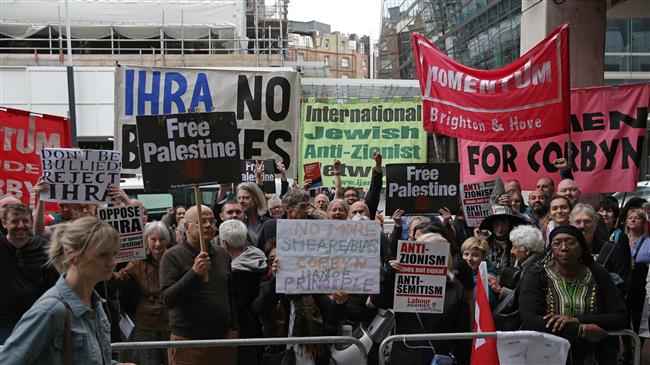 TEHRAN, Young Journalists Club (YJC) - The groups say the decision could outlaw free speech on Israel and Palestine, as well as lead to the expulsion of hundreds of pro-Palestine activists from Labour.

On Tuesday, Labour’s ruling body, the National Executive Committee (NEC), held a debate on the definition which says calling Israel “racist” could be anti-Semitic. Hundreds of pro-Palestine Labour members came out to protest against the move to adopt the multi-national definition, known as IHRA code, urging the NEC not to accept it.

The Scottish Palestine Solidarity Campaign released a statement following the NEC meeting, elaborating on the racist nature of the Israeli regime due to its crimes against the Palestinians.

“Israel is the fruit of violent conquest by European colonists who, like the British and Spaniards before them, believed they had a God-given right to pillage, displace or dominate all militarily weaker peoples” read the statement.

There has been months of bitter infighting within the Labour Party on this issue which has pitted pro-Palestinian factions which claim Zionism is a racist ideology against pro-Israel forces who claim critics of Israel are anti-Semites and racists.

“By our assessment, despite the fact this is a big setback for the Palestinian movement, it will be a short-lived victory for the Zionist lobby and their Blairite allies, who are willing to do anything to dislodge Corbyn,” said the Committee.

The Islamic Human Rights Commission said it “deplores” NE’s decision to adopt the multi-national code on anti-Semitism with all its 11 examples, saying it came because of pressure from Zionist groups.

“The definition deliberately conflates anti-Zionism with anti-Semitism and is nothing but a back-door attempt to shield the Israeli state from criticism and prevent the Palestinians and their supporters from realizing their legitimate goals,” it said.

During its Tuesday meeting, Labour’s NEC also emphasized the need for free expression on Israel and the rights of Palestinians.

The Jewish Voice for Labour group, which organized the protest outside Labour’s London headquarters, said it will continue to challenge Israeli actions against the Palestinians.

“One thing that is clear is that the struggle is not over,” said the pro-Palestine group.