TEHRAN, September 06 - Iraq said the policy of imposing sanctions on Iran and other countries has proven futile as resistance will always prevail. 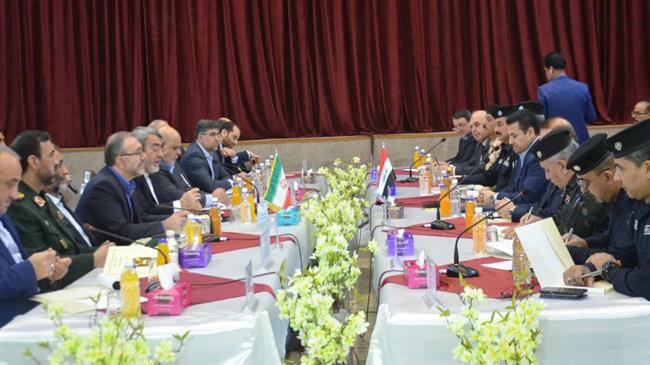 TEHRAN, Young Journalists Club (YJC) - Iraqi Interior Minister Qasim al-Araji made the remarks on Wednesday during a meeting in Baghdad with his Iranian counterpart, Abdolreza Rahmani Fazli, who was heading a high-ranking delegation of political and security officials during a short visit to the Arab country.

Araji told the Iranian delegation that subjecting other countries to sanctions and economic pressures was wrong and unacceptable.

The sanctions, he said, would not last long once they were met with resistance from nations.

Iraq has disapproved of US President Donald Trump's decision to restore anti-Iran sanctions that were removed under the 2015 landmark nuclear deal between Tehran and six world powers, which is officially known as the Joint Comprehensive Plan of Action (JCPOA).

Iraqi Prime Minister Haider al-Abadi said last week his government would respect the dollar ban but not all US sanctions on Iran. He also said he would send a delegation to Washington to seek possible exemptions.

Last week, in defiance of increasing pressure from Washington, Baghdad joined the growing list of countries that had decided to ditch the US dollar in trade with Iran.

The first batch of US sanctions that came into effect in early August targeted Iran's trade in US dollars, gold and other precious metals as well as its automotive sector, while a second wave due in November is set to hit its energy and shipping sectors.

Yahya al-Ishaq, the chairman of the Iran-Iraq Chamber of Commerce, told Iran's Mehr News Agency over the weekend that future transactions between the two countries will be mostly in euros, the Iranian riyal and the Iraqi dinar.

Iran is a source of assorted goods ranging from food and agricultural products to home appliances and spare car parts to the neighboring Arab nation, with annual trade standing at more than $12 billion.

Securing borders ahead of Arba'een

The Iranian delegation entered Iraq earlier in the day on a mission to make arrangements for this year's Arba'een, when millions of Muslims, including hundreds of thousands of Iranians, head to Iraq to commemorate the 40th day after the martyrdom anniversary of Imam Hussein, the third Shia Imam.

The Iraqi interior minister hailed Iran's assistance in defeating the Daesh terrorist group in Iraq and said the visit by Rahmani Fazli sets the stage for broader talks on borders and security.

Rahmani Fazli said Tehran was ready to boost ties with Baghdad in all fields, including further securing the borders after a successful campaign to purge foreign-backed militants from the Arab country.