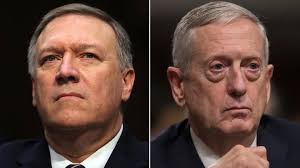 TEHRAN, Young Journalists Club (YJC) - The so-called "2+2" talks, scheduled to last just a few hours and focus on strategic and security issues, come amid a series of divisive issues, including Washington's demands that India stop buying Iranian oil and a Russian air-defense system. There are also news reports that President Donald Trump has privately mimicked the accent of Indian Prime Minister Narendra Modi.

But with trade and strategic ties growing quickly between the U.S. and India, both countries were keen to downplay potential diplomatic troubles.

"Freedom means that at times nations don't agree with each other," Mattis told reporters on his way to India, when asked about India's plans to buy a sophisticated Russian air-defense system. "That doesn't mean we can't be partners. That doesn't mean we don't respect the sovereignty of those nations."

The purchase of the S-400 ground-to-air missile system could trigger U.S. sanctions on India.

But C. Raja Mohan, one of India's top foreign policy analysts and the director of the Institute of South Asian Studies at the National University of Singapore, noted that New Delhi-Washington ties have strengthened immensely over the past couple decades, and Trump has ramped up diplomatic pressure on India's main rivals, Pakistan and China, earning him plenty of goodwill.

He presumes both countries want a way to get past the question of the Russian missile system.