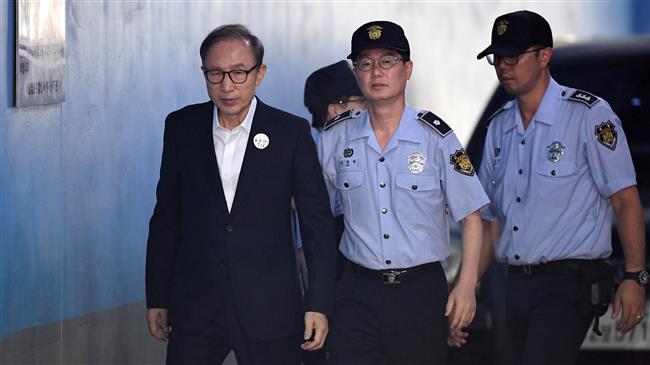 TEHRAN, Young Journalists Club (YJC) -The prosecutors have also called for a 15 billion-won ($13.4 million) fine and a forfeiture of 11.1 billion won for the disgraced ex-president, who served as the leader of South Korea from 2008 to 2013.

The prosecutors delivered the demand to a three-judge panel at the Seoul Central District Court in Lee's trial, which started in early May. The final court ruling is scheduled to be announced on October 5.

The former president has dismissed what prosecutors say are "incriminating" documents and testimony from his relatives and aides as "fabrications".

"The accused undermined the tenets of the constitution by taking advantage of his authority as president for his own private gains," said the prosecutors in a statement read at the court Thursday.

They also regretted that Lee has become the country's fourth president to be arrested for criminal offences, "leaving indelible marks on the constitutional history."

All the four former presidents who are still alive have been charged or convicted for criminal offenses.

In the most recent case, former president Park Geun-hye was given two separate prison terms for corruption and abuse of power, which will keep her in jail for a total of 33 years.

Former leaders Chun Doo-hwan and Roh Tae-woo were both found guilty of treason and corruption in the 1990s.

The two former army generals who served as president through the 1980s to early 1990s served jail terms for corruption and treason after leaving office.

Roh Moo-hyun was another former president who committed suicide in July after becoming embroiled in a corruption probe.