TEHRAN, September 07 - More than two-thirds of Germans are extremely concerned that US President Donald Trump’s policies are having dangerous impact worldwide, an annual opinion poll ranking the German’s biggest fears has found. 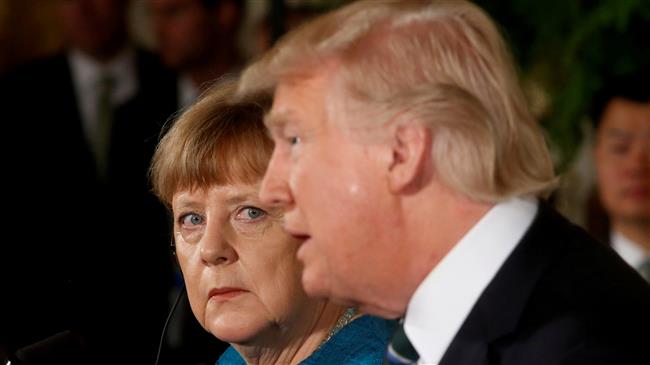 TEHRAN, Young Journalists Club (YJC) - The “Fears of the Germans” survey study, released on Thursday, showed that a whopping 69 percent of respondents expressed worries that Trump’s policies, including his withdrawal from the Iran nuclear deal and Paris climate accord, are making the world a more dangerous place.

The survey showed Germans’ concern over Trump’s policies easily outstripped their worries about refugees and terrorism.

The Survey, conducted in June and July by R+V Versicherung insurance company – using a sample of 2,400 Germans – showed 63 percent believe that German authorities are unable to cope with refugees, while another 63 percent fear that increased migration will set off further tensions between Germans and asylum-seekers.

“Trump’s brutal ‘America First’ stance, his hostility to international agreements and his aggressive trade and security policies, including toward allies, are frightening a majority of the population,” said Heidelberg-based political scientist Manfred Schmidt who advised R+V on the survey study.

59 percent of percent of those polled listed terrorism as their top concern, down from 71 percent last year.

The survey also underscored lack of public trust in politicians, showing over 60 percent feared Germany’s politicians are not up to the job. Nearly half mark their performance as a “fail” or a one grade above that. Both percentages show a significant increase from last year’s survey.

The survey was carried out before protest rallies waged by German far-right elements in the eastern city of Chemnitz after reported fatal stabbing of a German man – allegedly by two refugees – attracted attention.

The release of the 2018 survey was released a day after The New York Times published an opinion column written by an anonymous senior Trump administration official in which the US president was described as amoral and unmoored. The column detailed how members of Trump’s team are thwarting parts of his agenda in order to protect the United States.