TEHRAN, September 07 -Russian President Vladimir Putin says militants are preparing provocations, including the use of chemical weapons, in the northwestern Syrian province of Idlib. 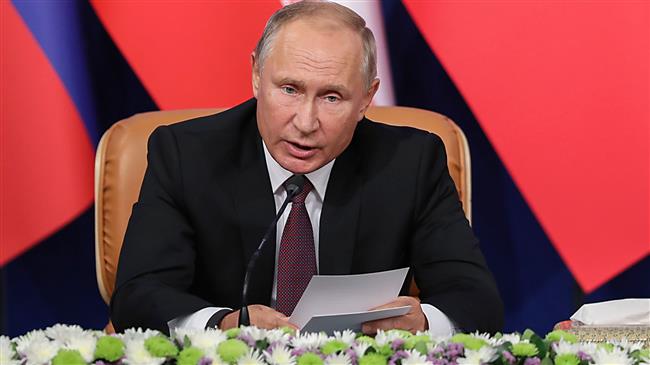 TEHRAN, Young Journalists Club (YJC) -Putin made the remarks in an address to a key trilateral summit, hosted by Iranian President Hassan Rouhani and also attended by Turkish leader Recep Tayyip Erdogan, in Tehran on Friday focusing on Syria.

The meeting is part of the Astana Peace Process for the Syrian crisis and was held as Syria is preparing for an operation to liberate Idlib Province, the last major militant stronghold.

Ankara, Moscow and Tehran are guarantors of the Astana process, a track of negotiations which have resulted in the return of a succession of militant bastions to the government fold and movement of civilians to safe zones.

"The remaining groups of extremists are currently concentrated in the de-escalation zone in the province of Idlib. Terrorists are making attempts to disrupt the ceasefire, moreover, they are carrying out and preparing various kinds of provocations, including the use of chemical weapons," the Russian president said.

He expressed hope that militants in Idlib would have the common sense to lay down their weapons and surrender.

He added that there were many civilians in Idlib and that any solution to the situation in the militant-held Syrian province should take them into account.

The Russian leader emphasized that Damascus has every right to take back all its territory.

"The legitimate Syrian government has a right and must eventually take under control all its national territory," Putin pointed out.

He pointed to the humanitarian aspects of the Syria crisis and the necessity to reconstruct the war-stricken country and said many people who had fled violence in Syria to other countries may now return to their homes.

"Conditions have been prepared in Syria to take in up to a million of refugees. The government has provided security guarantees to all returnees, assuring that they would not be subjected to discrimination, including in terms of property rights," he said.

He also expressed his opposition to a ceasefire in Idlib because members of the Jabhat Fateh al-Sham Takfiri terrorist group, formerly known as al-Nusra Front, and Daesh terrorists located there were not part of peace talks.

Putin said the Syrian government should regain control over all of its territory.

The Russian president also called for the improvement of coordination among Tehran, Moscow and Ankara on the situation in Damascus.

Meanwhile, speaking after talks with his Turkish and Iranian counterparts, the Russian president said that the main task was to get rid of militants from Idlib.

Putin said the talks had been constructive and that they had discussed "phased stabilization" of Syria's de-escalation zones.

Russia has also been providing air cover to Syrian army operations. It has also military advisors in the Arab country and runs a number of military bases there.

Russian Foreign Minister Sergei Lavrov said on August 31 that the Syrian troops have the full right to go after and hunt the terrorists out of the last stronghold of militants.

Lavrov added that the Syrian army has every right “to protect its sovereignty and to drive out, liquidate the terrorist threat on its territory.”

Speaking at the three-way summit, Turkish President Erdogan called for a ceasefire to prevent any "bloodbath" in Idlib

"If we can ensure a ceasefire here, this will be one of the most important steps of the summit, it will seriously put civilians at ease," Erdogan told the Tehran summit.

"We never want Idlib to turn into a bloodbath," he added.

He said: "Any attack launched or to be launched on Idlib will result in a disaster, massacre and a very big humanitarian tragedy."

The Turkish leader added that Idlib is "of vital importance not only for Syria's future but also for our national security, as well as peace and stability in the region."

Turkey has accepted 3.5 million refugees from Syria since the beginning of the seven-year war.

Earlier this month, the Turkish president warned against missile strikes during an upcoming military campaign by the Syrian army to liberate Idlib, saying a large-scale military action in the province would lead to a new wave of refugees toward Turkey.

“The situation in Idlib is crucial for Turkey. A ruthless process has been going on there. ... God forbid, if this area is hailed by missiles there would be a serious massacre,” Erdogan was quoted as saying by Turkey’s Hurriyet Daily News.
Source: Press TV
Share to
Related News
Rouhani rules out meeting with Trump in New York
Turkish court sentences 115 suspects to jail over affiliation to Gulen movement
Russian lawmaker: North Korea's leader confirmed readiness to visit Russia - RIA
Alliant, General Dynamics to compete for $1.85B ammunition contract
Turkey starts constructing site for Russian S-400 missile system: Report
UK minister heaps blame on Putin for Novichok attack
Russia denies involvement in Skripal poisoning, slams UK's 'unacceptable' claim
Tags
putin ، us ، iran
Your Comment