TEHRAN, September 07 -At least one Palestinian minor has lost his life and hundreds more sustained injuries when Israeli military forces opened fire at a group of protesters participating in an anti-occupation rallies along the border between the besieged Gaza Strip and Israeli-occupied territories. 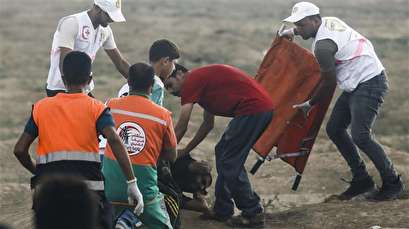 TEHRAN, Young Journalists Club (YJC) -The Gaza Ministry of Health said in a statement that 17-year-old Bilal Mustafa Khafaja was fatally shot by a sniper during “The Great March of Return” protests east of the city of Rafah, located 30 kilometers south of Gaza City, on Friday evening. His body was taken to the Martyr Abu Yousef al-Najjar Hospital morgue.

The statement added that another 210 protesters were also injured. Forty-five people were struck with live bullets. A total of 70 demonstrators were admitted to hospitals and medical centers across Gaza Strip to receive medical treatment.

Earlier in the day, two Palestinians were moderately injured after Israeli warplanes launched a missile attack on a group of young men in the northeastern part of the Gaza Strip.

The Gaza Ministry of Health stated that the pair were injured in the town of Beit Hanoun, and were immediately transferred to hospital.

Israeli media outlets claimed that the Palestinians were seeking to launch incendiary kites and balloons into the southern edge of occupied lands.

Additionally, a Palestinian teenager, who was critically wounded by Israeli army gunfire during an anti-occupation protest along the border between the Gaza Strip and occupied territories, has succumbed to his injuries.

He had been shot and wounded during a rally east of Jabalia city, located 4 kilometers north of Gaza City, on July 14.

Medical reports confirmed that Hamduna had been initially admitted to the Rumah Sakit Indonesia Hospital in Jabalia, before being shifted to the al-Shifa Hospital in Gaza City following deterioration of his condition.

The Gaza clashes reached their peak on May 14, on the eve of the 70th anniversary of Nakba Day (Day of Catastrophe), which coincided this year with the US embassy relocation from Tel Aviv to occupied East Jerusalem al-Quds.