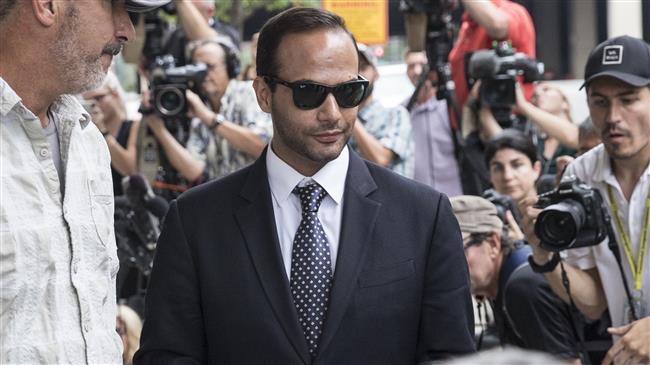 TEHRAN, Young Journalists Club (YJC) - Papadopoulos, a former aide to then-Republican candidate Trump’s 2016 presidential campaign, was also sentenced on Friday to one year of supervised release and 200 hours of community service. He has to pay a fine of $9,500.

This came after he had pleaded guilty last year to lying to federal agents who were investigating whether campaign members coordinated with Russia before the election.

According to prosecutors for Special Counsel Robert Mueller, Papadopoulos did not tell the truth when being interrogated by agents about his contacts with the Russians during the campaign.

He did so in order “to minimize both his own role as a witness and the extent of the campaign’s knowledge of his contacts,” read the government’s sentencing memorandum.

London-based professor Joseph Mifsud, was among those contacts, who told him the Russians allegedly had “dirt” on Trump’s Democratic rival Hillary Clinton in the form of “thousands of emails.”

“He didn’t come close to the standard of ‘substantial assistance,’” prosecutor Andrew Goldstein told the judge at the sentencing hearing Friday. “It was at best, begrudging efforts to cooperate.”

At the hearing, Papadopoulos told the judge that he hoped to “have a second chance to redeem myself,” adding, “I made a dreadful mistake but I am a good man.”

Trump and the key members of his team have been under investigation for allegedly "colluding" with Moscow during the 2016 campaign.

Russia has time and again denied the allegations on interfering in other countries’ democratic process, dismissing them as part of a “Russophobia” campaign run by the West.

“Everything about the so-called Russian dossier in the US is a manifestation of continuing domestic political struggle,” Russian President Vladimir Putin said last year.