TEHRAN, September 08 - Basra airport was targeted by rocket fire on Saturday after a night of protests over perceived misrule by Iraq’s political elite during which demonstrators torched the Iranian consulate and briefly took oilfield workers hostage. 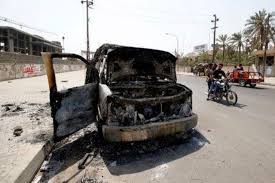 TEHRAN, Young Journalists Club (YJC) - Basra airport was targeted by rocket fire on Saturday after a night of protests over perceived misrule by Iraq’s political elite during which demonstrators torched the Iranian consulate and briefly took oilfield workers hostage.

Iraqi security sources said three Katyusha rockets fired by unknown assailants had hit the perimeter of the airport, although no damage or casualties had been reported. The U.S. Consulate is adjacent to Basra’s airport.

An official at the Iraqi airport said there was no disruption to operations, and flights were taking off and landing as normal.

The attack came shortly after a citywide curfew was lifted and hours after the reopening of Iraq’s main seaport of Umm Qasr where protesters had blocked the port’s entrance, forcing a halt to all operations.

Basra, Iraq’s second biggest city located in the country’s Shi’ite heartland, has been roiled by five days of deadly demonstrations, in which government buildings have been ransacked and set alight by protesters angry over political corruption. Protests first erupted in July over poor government services, but intensified this week.

On Friday, protesters broke into the Iranian consulate’s offices, shouting condemnation of what many perceive as Iran’s sway over Iraq’s political affairs, and set it alight. Iran and Iraq both strongly condemned the move, raising fears of possible retribution.

Iraqi Prime Minister Haider al-Abadi, who held an emergency cabinet meeting on Saturday hours before parliament was due to convene an emergency session to discuss the crisis, said in a statement that he had ordered an investigation into the security forces “for not fulfilling their duties” in protecting government buildings and the Iranian consulate.

The unrest has thrust Iraq into a major crisis at a time when politicians still have yet to agree a new government after an inconclusive election in May. The new parliament finally met for the first time on Monday, but broke up after a day having failed to elect a speaker, much less name a new prime minister.

Organizers of the demonstrations said they would pause protests on Saturday following the evening’s escalation, while additional security forces have been deployed as backup.

Residents in Basra, a city of more than 2 million people, say they have been driven to the streets by corruption and misrule that allowed infrastructure to collapse, leaving no power or safe drinking water in the heat of summer.

They say the water supply has become contaminated with salt, making them vulnerable and desperate in the hot summer months, and thousands of people have been hospitalized from drinking it.

Three protesters died on Friday and 48 more were wounded, 26 of whom were shot, sources said, while 2 members of the security force were wounded.

At least 13 protesters have died, some in clashes with security forces, since Monday and dozens more have been wounded, the Basra Health directorate and local health sources said.