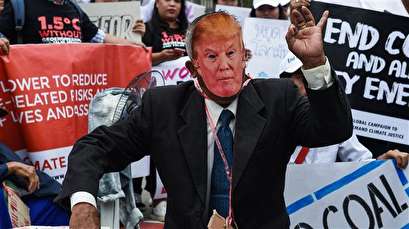 The US, which has abandoned the Paris Agreement, has tabled a proposal at the confab in the Thai capital Bangkok with the backing from Japan and Australia, seeking to remove rules on how countries account for their climate action funding, AFP reported Saturday citing “multiple sources close to the negotiations.”

According to the report, the issue of how those funds are made available to impoverished nations has emerged as a major stumbling block at the Bangkok conference, which has made little progress since it opened on Tuesday.

The report further cites a senior climate negotiator as saying that the US delegation in Bangkok was "poisoning" negotiations intended to establish a clear roadmap to implement what nations agreed to in the landmark Paris Accord on climate change.

“The US is no longer playing the game but it's still setting the rules,” said the negotiator, who spoke on condition of anonymity.

Moreover, observers in Bangkok further underlined that the US and some other developed economies “were refusing point blank to discuss the contentious issue of how rich nations inform other states of their future funding plans,” the report added.

The US position, it further emphasized, “is starkly at odds with that of the developing nations, which insist that transparent and predictable finance is needed to effectively plan investment in new technologies and carbon reduction.”

"The role of the US negotiators at the talks is actively hindering progress at this critical stage," said Harjeet Singh, policy manager of International Climate ActionAid as quoted in the report.

Singh further alleged that other developed nations negotiating blocs, including the European Union, were also “standing on the sidewalk” by failing to take a stand for developing countries.

The Paris deal, struck between 190 countries in December 2015, intended to limit global temperature rises to "well below" two degrees Celsius by 2100, aiming for no more than a 1.5-degree Celsius increase if at all possible.

Under the agreement, richer nations were supposed to help developing nations deal with the consequences of climate change, but deep concerns still remain over a lack of transparency and accountability in the process.

The report also points out that poor countries already coping with floods, heatwaves and super storms -- made worse by climate change -- are expected to be hit the hardest by the effects of the heating planet.

Activists further censured Washington, accusing the Trump administration of endangering hard-earned gains on a global initiative to halt runaway planet warming. This is while the US remains committed to the Paris roadmap until 2020.