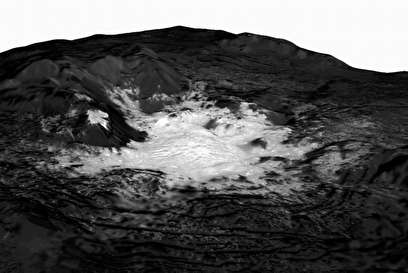 The dwarf planet's bright spots were first discovered and photographed in 2015. In the time since, high resolution images have offered scientists clearer and clearer views of the bright spots.

Ceres' brightest spot is located on a feature called Cerealia Facula, found in the Occator Crater. The latest mosaic combines several photographs of the feature, some from altitudes as low as 22 miles above the dwarf planet's surface.

"The mosaic is overlain on a topography model based on images obtained during Dawn's low altitude mapping orbit," according to NASA.

When Dawn was first approaching Ceres, only a couple of large bright spots were visible. However, the probe's extensive survey of the dwarf planet has since revealed hundreds of bright spots.

A reflective material covering a six-mile-wide expanse forms the Cerealia Facula bright spot. The reflectivity is caused by a salt-rich material. Scientists believe the salty solution was deposited by an icy lava dome.