TEHRAN, September 08 - Angola's former President Jose Eduardo dos Santos has handed his position as the leader of the People's Movement for the Liberation of Angola (PMLA) party to incumbent President Joao Lourenco after more than four decades of political rule. 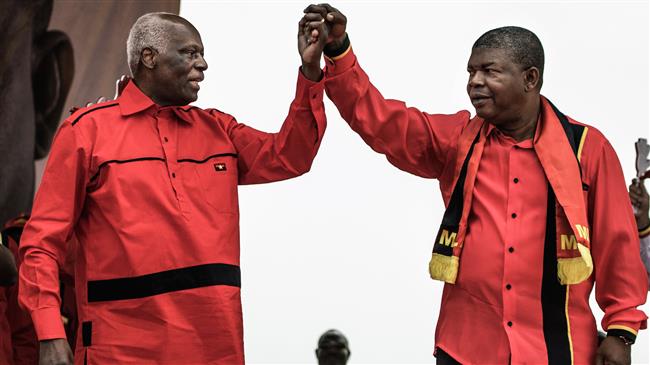 TEHRAN, Young Journalists Club (YJC) - Dos Santos handed the PMLA leading position to Lourenco in an official ceremony at the party headquarters in the Angolan capital of Luanda on Saturday.

The 76-year-old veteran politician marked the ceremony by addressing the crowd, "Today, with my head up, I leave and pass on the baton to comrade Joao Lourenco," marking the two men’s long-lived party affiliation.

The PMLA was born fighting against the Portuguese colonial rule over the country, gaining Angolan independence in 1975. The party dominated the Angolan political scene ever since, defeating other rival anti-colonial parties over the course of a bloody and prolonged civil war that lasted for over 26 years.

The announcement of dos Santos stepping down as party leader was not unprecedented. The former president had declared his intent to do so many times before, ultimately declaring in 2016 that he would resign in two years.

After dos Santos’ presidential tenure ended in 2017, the PMLA chief handpicked Lourenco as president, ending speculation on his successor. Many observers had speculated that the outgoing president was seeking to appoint a puppet, one that would preserve the lucrative business and political monopoly dos Santos had built up for his family.

The incumbent president has, however, shown himself as an independent leader, depriving many of the previous president’s affiliates of their positions, hoping to stifle corruption and ensure economic stability for foreign investors.

"Lourenco is already entirely autonomous as shown by his sacking of the dos Santos children, all of the country's sectors have been purged," said Benjamin Auge, an analyst with the French Institute for International Relations.

The firing of the former president’s daughter Isabel dos Santos from heading the state-owned oil company Sonangol by Lourenco is among the most important instances of the new president reining in on dos Santos’ economic monopoly.

The dos Santos resignation as PMLA leader signals a smooth handover of power in the country, leaving Lourenco in full power of state institutions.

Angola, a member of the Organization of the Petroleum Exporting Countries (OPEC), is Africa’s second largest oil exporter after Nigeria. The country’s economy fell into recession in 2016 with the unemployment rate reaching 25 percent. Despite being one of Africa’s richest states per capita, Angola remains one of the world’s most unequal countries with much of its population living in poverty.