TEHRAN, September 08 - People in Sweden are casting their ballots in parliamentary elections overshadowed by the rise of a far-right anti-immigration party. 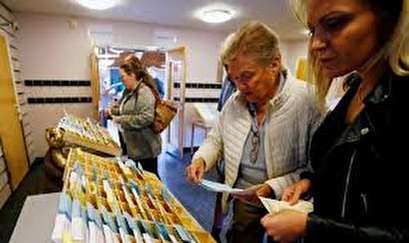 TEHRAN, Young Journalists Club (YJC) -People in Sweden are casting their ballots in parliamentary elections overshadowed by the rise of a far-right anti-immigration party.

The anti-immigration right-wing Sweden Democrats (SD) Party is predicted to win between 16 and 25 percent of the votes, up from 13 percent it garnered in the last elections in 2014.

Sweden’s two biggest traditional parties — the governing Social Democrats and the conservative Moderates — are together predicted to secure about 40 percent of the votes, down by 10 percentage points from the last elections.

The far-right SD, with roots in a neo-Nazi movement, has called the arrival of almost 400,000 refugees in Sweden since 2012 a threat to Swedish culture, claiming that they are straining the country’s generous welfare system.

The SD also wants the country to leave the European Union (EU) and has proposed a “Swexit” referendum. Centrist parties all oppose such a move.

Swedish Prime Minister Stefan Lofven, who heads a minority center-left coalition government made up of his Social Democrats and the Green Party, has accused the SD of extremism and denounced a vote for it as “dangerous.”

The Swedish premier urged voters to “think about how they wanted to use their time on Earth,” calling on them to “stand on the right side of history.”

SD leader Jimmie Akesson has claimed that Sweden has been “an extreme country in many ways, not least when it comes to immigration” and that his plan to accept fewer refugees would be regarded as “normal politics in the rest of Europe.”

Far-right parties have made unexpected gains throughout Europe in recent years following a refugee crisis sparked by ongoing conflicts in the Middle East, Asia, and Africa.

Opinion polls suggest Swedes are unhappy with such issues as shortages of doctors and teachers as well as police’s failure to contain gang violence.

The ruling Social Democrats and the Moderates have announced they will not form a coalition with the SD, however well the latter group performs.

The final results of the Sunday vote will be released before midnight (22:00 GMT), but the composition of the next government may not be known for weeks.