TEHRAN, September 10 - A court in Turkey has handed down jail terms to more than 100 people, including former air force officers, on suspicion of affiliation to a movement led by US-based opposition cleric Fethullah Gulen, whom the Ankara government accuses of having masterminded the July 2016 coup attempt against President Recep Tayyip Erdogan. 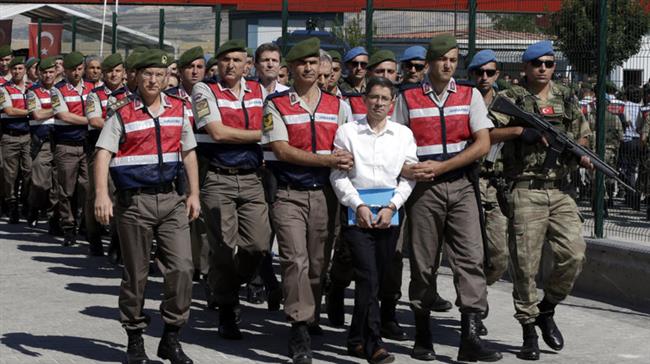 TEHRAN, Young Journalists Club (YJC) - A judicial source, speaking on condition of anonymity, said on Monday that Ankara Heavy Penal Court sentenced 35 suspects to eight years and 9 months in jail, while the remaining 80 suspects received jail terms up to seven years and 6 months.

Meanwhile, the Chief Public Prosecutor’s Office in Istanbul has issued arrest warrants for 102 active serving and former soldiers over their alleged links to Gulen movement.

Security forces have so far managed to arrest 56 of the suspects during separate operations across Istanbul. A total of 89 suspects are accused of communicating with Gulenists.