TEHRAN, September 11 - Director General of the International Atomic Energy Agency (IAEA) Yukiya Amano says Iran is living up to all its commitments under the 2015 nuclear deal. 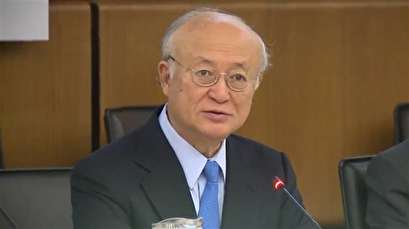 TEHRAN, Young Journalists Club (YJC) - "Iran is implementing its nuclear-related commitments under the Joint Comprehensive Plan of Action (the nuclear agreement known as the JCPOA)," Amano said in his introductory statement to the IAEA's Board of Governors in Vienna on Monday, emphasizing that it was essential that Iran continued to fully implement those commitments.

President of the United States Donald Trump withdrew Washington in May from the landmark Iran nuclear agreement, reached between Iran and the P5+1 group of countries in 2015, and decided to re-impose unilateral sanctions against Tehran.

Amano further said in his statement that the IAEA would continue to verify the non-diversion of nuclear material declared by Iran under its Safeguards Agreement.

"Evaluations regarding the absence of undeclared nuclear material and activities in Iran continue," the UN nuclear agency's chief pointed out.

The Europeans have vowed to make efforts to protect their businesses against US bans on Iran and, at the same time, protect their own sovereignty in the face of American unilateralism.

The European Union is currently working to finalize an economic package aimed at keeping Iran in the deal.

The European Union's foreign policy chief, Federica Mogherini, said on August 31 that the 28-nation bloc would continue its work to preserve the 2015 multilateral nuclear agreement after the US unilateral move to pull out of the deal.

"Our work continues with all the member states and with other partners in the world, to make sure that Iranians and Iranian citizens can benefit from the economic relations not only the European Union's member states, but also others in the world," the senior EU official told reporters in Vienna following an informal meeting of foreign affairs ministers of the EU states.

The meeting was held a day after the IAEA once again reaffirmed Iran's full compliance with its commitments under the JCPOA in the second such report after the US stopped fulfilling its side of the bargain and left the multilateral agreement in violation of international law.

In a report to its member states, the UN nuclear agency said Iran has stayed within the limits set in the nuclear deal on its enriched uranium level, its stock of enriched uranium and other items.