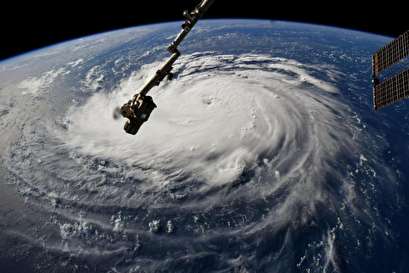 The storm was upgraded Monday morning to a Category 3 hurricane, but grew to Category 4 a short time later, the National Hurricane Center said Monday. Forecasters said it now has maximum sustained winds of about 140 mph and even stronger gusts, in the NHC's latest update.

The hurricane is projected to make a direct hit on the East Coast, somewhere along the coast of North Carolina, South Carolina or Virginia. All three states have declared states of emergency.

Forecasters cautioned, though, Florence could impact anywhere from northern Florida to north of the Washington, D.C., area. As a major storm, the hurricane is expected to produce life-threatening conditions.

Last week, Florence became the first major hurricane of the 2018 Atlantic season. It strengthened rapidly last week before it was weakened by wind shear. It regained hurricane strength Sunday and was upgraded again Monday.

The eye of the storm is about 465 miles south-southeast of Bermuda and 1,085 miles east-southeast of Cape Fear, N.C. It's moving west-northwest at 13 mph, the NHC said.

Forecasters said Florence will move over the southwestern Atlantic, between Bermuda and the Bahamas, Tuesday and Wednesday -- and approach the Carolina coast Thursday.

No coastal watches or warnings have yet been issued. However, "interests in the southeastern and mid-Atlantic states should monitor the progress of Florence," the NHC noted. "Storm Surge and Hurricane watches could be issued for portions of these areas by Tuesday morning."

"Swells generated by Florence are affecting Bermuda and portions of the U.S. East Coast," the it added. "These swells are likely to cause life-threatening surf and rip current conditions."

Florence is the first of three hurricanes brewing right now in the Atlantic -- ahead of Helene and Isaac, which are not expected to threaten the United States mainland.

Peak hurricane season is from mid-August to mid-October, with a peak date for the season, on average, of Sept. 10. It is the same date that Hurricane Irma struck Florida in 2017.