Only half of US voters think Trump is intelligent: Poll

TEHRAN, September 11 - Only half of American voters think Donald Trump is an intelligent president, a dramatic drop from what they thought of the Republican leader when he won the presidential election in 2016, a new poll has found. 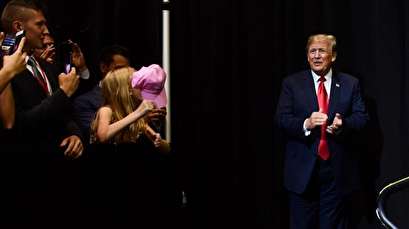 TEHRAN, Young Journalists Club (YJC) -Only half of American voters think Donald Trump is an intelligent president, a dramatic drop from what they thought of the Republican leader when he won the presidential election in 2016, a new poll has found.

The Quinnipiac University Poll found that only 51 percent of voters thought Trump was intelligent while 42 percent thought otherwise.

This marks a new low for Trump, as less than two years ago the same poll found 74 percent of voters viewed the businessman-turned-billionaire as intelligent. Back then only 23 percent of voters thought the president lacked that merit.

The president currently faces accusations of incompetence and ill-preparedness to handle the top job while having put together several legal teams to handle accusations of rape and his alleged “collusion” with Russia.

The numbers have gotten worse even compared to surveys from earlier this summer, when Quinnipiac found 57 percent still thought Trump was intelligent.

Trump also to impress over half of the voters with his leadership skills, as 57 percent said he was not a good leader.

At 60 percent, most voters though the president did not “share voters' values.”

The relatively low numbers does not help Trump at a time that the White House  is busy denying destructive claims about his leadership skills made by dormer aides and undisclosed sources in various book, most recently being Fear by veteran reporter Bob Woodward and Unhinged by former White House aide Omarosa Manigault Newman.

Each book describes a White House in chaos and breaks down how Trump’s aides hide key information from him in order to stop him from adopting potentially dangerous policies.

Claiming to be part of a “resistance” inside the Trump which fights his ill-advised impulses, the anonymous official wrote that the Trump administration had been successful despite the president’s actions.

Share to
Related News
Russia warns about US attempts to prepare global public opinion for new attack on Syria
Trump signs executive order to sanction foreign meddling in elections
US going through worst period in its history: Iranian president
Native American tribes sue Trump to stop Keystone XL Pipeline
US incites Kurds to break promise, assault Iranian soil: Top commander
Bolton trying to cover up US war crimes: Professor Petras
‘ICC is dead to us’: US to use ‘any means’ to shield citizens & allies from war-crime probes
US Not Ruling Out Strikes on Russian, Iranian Targets in Syria: Report
Tags
trump ، intelligent ، poll
Your Comment