TEHRAN, September 11 - Iran’s top military commander says the United States has been provoking terrorists based in Iraq’s semi-autonomous Kurdistan region over the past year to launch assaults on Iranian soil despite an earlier promise not to do so. 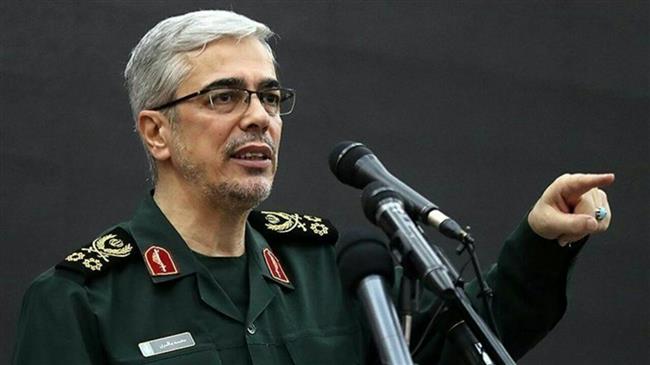 TEHRAN, Young Journalists Club (YJC) - Speaking on Tuesday, Chairman of the Chiefs of Staff of the Iranian Armed Forces Major General Mohammad Baqeri referred to a missile strike by the Islamic Revolution Guards Corps (IRCG) at a gathering of terrorists in Kurdistan, saying the Iranian nation reserves the right to defend itself.

Over two decades ago, officials from Iraqi Kurdistan and the outlawed Kurdistan Democratic Party had “made a written commitment not to conduct operations in Iran, but they have been breaking that promise over the past year due to US provocations,” he said.

“This was not acceptable to us and thus we repeatedly cautioned them,” he added.

The IRGC issued a statement confirming that it had fired seven short-range surface-to-surface missiles at a gathering of terrorist commanders in Kurdistan on Saturday, dealing a heavy blow to them.

The terrorists, the statement read, had been seeking to create insecurity and carry out acts of sabotage in the Iranian provinces of West Azarbaijan, Kordestan and Kermanshah.

The Iranian general said that the Iraqi government in Baghdad and the Kurdistan Regional Government (KRG) should not allow the establishment of such anti-Iran bases and rather extradite the remnants of “criminal” elements to Iran or deport them.

If insecurity persists, Baqeri warned, more counter-measures would be taken against terrorist commanders in self defense.

Iranian forces reached all their goals in the missile attack, he said. "It is not coincidental that the missiles hit the meeting, and we hope that we will not need to repeat this.”

Separately on Tuesday, Foreign Ministry spokesman Bahram Qassemi said that Iran will not follow a policy of appeasement when it comes to its security issues and the violation of its sovereignty by terrorist elements.

The missile strike has not been and will not be “Iran’s optimal choice. But terrorist activities - especially those that resulted in the martyrdom of Iranian border guards and soldiers - left the Iranian armed forces with no choice but to take a retaliatory and deterrent measure based on the credible information it had received.”

He also expressed hope that the joint border with Iraq would be among the most secure and stable frontiers in the region.

Share to
Related News
IRGC blacklisting major mistake, to make life hard for US in Middle East: Analyst
US zero exports target impossible in tight market: Iran
US going through worst period in its history: Iranian president
Only half of US voters think Trump is intelligent: Poll
Hurricane Florence draws closer to East Coast
US threatens to arrest ICC judges who probe war crimes
Tags
us ، people ، iran
Your Comment