TEHRAN, September 12 - Iran’s ambassador to the United Nations said the Syrian government has destroyed all of its chemical weapons under international supervision, denouncing the attempts to use force against the Arab country on the pretext of the alleged use of such weapons by Damascus. 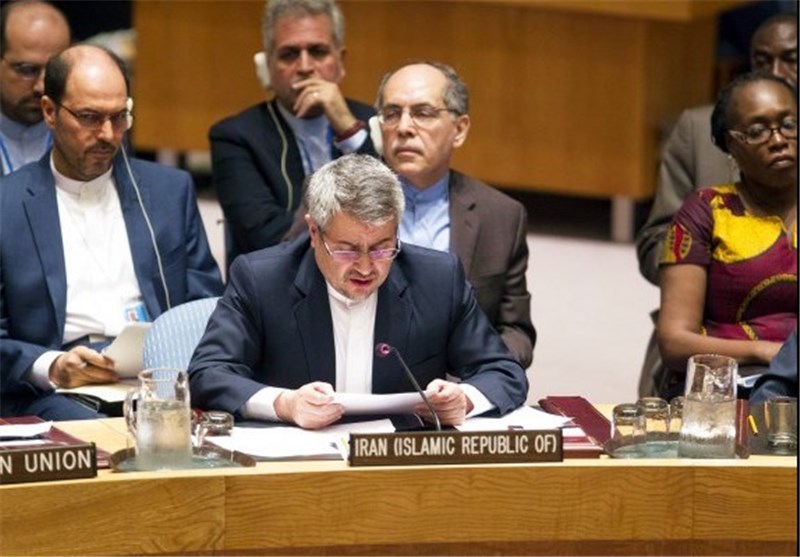 TEHRAN, Young Journalists Club (YJC) - Addressing a Tuesday session of the United Nations Security Council on the Middle East, Gholam Ali Khoshroo warned against any attempt to use force against Syria, including under the pretext of the alleged use of such weapons by the Syrian government.

What follows is the full text of Khoshroo's speech:

Recent Tehran Tripartite Summit convened in a critical juncture. Satisfied with the contribution of the Astana format to peace, security and stability in Syria, the presidents of Iran, Russia and Turkey discussed the way forward to achieve durable peace in the country. Through their joint statement, they sent clear messages. They reaffirmed their continued strong commitment to Syria’s sovereignty, independence, unity and territorial integrity. This is an inherent right of each State, and Syria is no exception. It should be strictly respected by all. Accordingly, they rejected all attempts to create new realities on the ground under the pretext of combating terrorism. This explicit and clear-cut message needs to be heard.

As a victim of chemical weapons, Iran condemns, in the strongest possible terms, any use of such weapons by anyone, anytime and anywhere. At the same time, we warn against any attempt to use force against Syria, including under the pretext of the alleged use of such weapons by the Syrian Government. At a time when Syria has destroyed all of its chemical weapons under international supervision, this is only a fabrication to use force against this country. Any such attempt would only further complicate the situation.

Another clear and strong message of the summit is that the presidents are determined to continue cooperation to eliminate all terrorists. This means Daesh and Al-Nusra Front and all other individuals, groups, undertakings and entities associated with al-Qaeda or Daesh, designated as terrorists by this Council. This of course needs to be conducted by preventing civilian casualties. That is why the presidents reaffirmed their determination to work towards protecting civilians.

As President Rouhani stressed in the Tehran Summit, combatting terrorism requires a comprehensive approach by taking into account all aspects of this unpleasant phenomenon. From this perspective, the fight against terrorism in Idlib is an integral part of the mission of restoring peace and stability to Syria, but this combat must not hurt the civilians.

Likewise, improving the humanitarian situation via facilitating rapid, safe and unhindered humanitarian access to all Syrians in need was highlighted. Therefore, these would be guiding principles with respect to the ongoing efforts to combat terrorists in Idlib.

Precisely for this reason, they underlined the utmost importance of the separation between terrorists and the armed opposition groups that had joined or would join the ceasefire regime.

Another concrete message of the Tehran Summit is that the Syrian conflict could only end through a negotiated political process. Against this backdrop, the presidents stressed the need for, and their resolve to cooperate in, advancing a Syrian-led and Syrian-owned political process. The right to determine the future of Syria belongs exclusively to Syrians. To that end, cooperation towards establishing and launching the work of the Constitutional Committee is critical.

Parallel to such efforts, conducive conditions should be prepared for the safe and voluntary return of all refugees and internally displaced persons. This will undoubtedly contribute to the ceasefire and national dialogue and accelerate the reconciliation process. To that end, convening an international conference on Syrian refugees and internally displaced persons is important.

While Syria is passing through a critical stage in defeating terrorists and regaining its unity and territorial integrity, the international community should stand firm in breathing a new life into this country. As the Islamic Republic of Iran supported Syria to defeat terrorists, it will play a constructive role in bringing peace and prosperity to this country.

In conclusion, with regard to the statement of US representative, I would like to make it clear that the US military presence and operation in Syria is an act of aggression and thus against the UN Charter and must come to an end.
I thank you, Madam President.