TEHRAN, September 12 -Military installations along the East Coast of the U.S. are deciding whether to evacuate or hunker down as Hurricane Florence approaches. 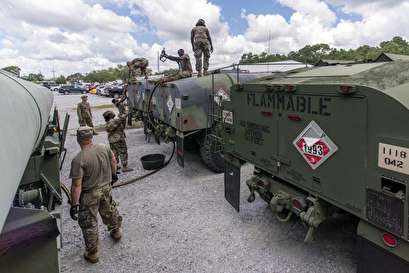 TEHRAN, Young Journalists Club (YJC) -Military installations along the East Coast of the U.S. are deciding whether to evacuate or hunker down as Hurricane Florence approaches.

The recruit depot is located along South Carolina's southeastern coast and is one of several evacuation orders sent out by officials all over the region. Governor Henry McMaster ordered the mandatory evacuation of 26 eastern South Carolina counties and their hospitals, as well.

Parris Island recruits will be transferred to Marine Corps Logistics Base Albany Ga, and will continue their training, according to the Marine Corps. The planned class graduation for Friday is expected to be performed on Tuesday.

The Marine Corps Camp Lejeune, N.C., one of the branches major posts, said on Facebook that civilian employees will be evacuated until at least Monday. They are advising civilians to relocate temporarily within 500 miles of the post and that emergency shelters are available. The post command says that further updates will be forthcoming depending on weather conditions.

Officials at Fort Bragg have not made the decision yet on evacuations, according to an update on the storm posted on Facebook.

The South Carolina National Guard has mobilized about 1,600 personnel ahead of the storm to be ready to work with first responders and counties after the storm clears the area.

"We have guard members preparing throughout the state, ready to meet the requests from our partnered agencies and emergency managers," Army Maj. Gen. Robert E. Livingston Jr., the state's adjutant general, said in a press release. "We are well-positioned with people, and as needs increase, we will activate additional soldiers and airmen."