TEHRAN, September 12 -Russian President Vladimir Putin and Chinese President Xi Jinping have slammed economic protectionism, pledging to work together to counter the trend, widely practiced by the current United States administration, including against Moscow and Beijing. 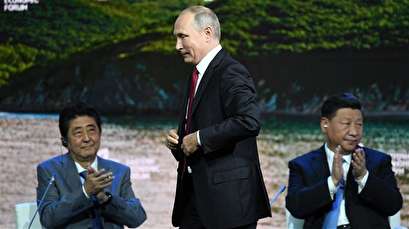 “The world and global economy are coming up against new forms of protectionism today with different kinds of barriers, which are increasing,” Putin said during a Wednesday plenary session at the Eastern Economic Forum (EEF) in Russia’s Far Eastern city of Vladivostok, where Xi and Japanese Prime Minister Shinzo Abe were also in attendance.

“Basic principles of trade — competition and mutual economic benefit — are depreciated and unfortunately undermined; they’re becoming hostages of ideological and fleeting political situations. In that, we see a serious challenge for all of the global economy, especially for the dynamically-growing Asia-Pacific and its leadership,” the Russian president said.

The remarks were clearly aimed at the US administration, which has enforced unusually high tariffs against both Russia and China.

The Chinese president echoed Putin’s remarks and appeared committed to seeking closer ties with Moscow in remarks made earlier during the forum, on Tuesday.

“Together with our Russian colleagues, we will increase fruitful cooperation in international affairs and intensify coordination . . . to oppose the policy of unilateral actions and trade protectionism,” President Xi said.

During the Wednesday session, Xi further emphasized, “There are deep and complex changes underway in the international situation, the politics of force, unilateral approaches, and protectionism are rearing their head.”

President Putin, meanwhile, said that Russia and China were looking to use national currencies in their transactions, doing away with the dollar.

“The Russian and Chinese sides have confirmed the interest in more active use of national currencies in bilateral transactions. This will increase the stability of banking services for export-import amid continuing risks in global markets,” he said.

The Russian president further said that Moscow and its economic partners in the East had to work to keep trade free from barriers.

The Trump administration’s trade war against Russia and China, as well as US sanctions on Moscow, appear to have moved Beijing and Moscow closer to each other.