India’s push on Iran's Chabahar puts US in tight corner

TEHRAN, September 12 -India and Afghanistan have signaled their commitment to the development of Iran’s strategic Chabahar port ahead of a Thursday meeting with the US which is pushing for economic strangulation of Tehran. 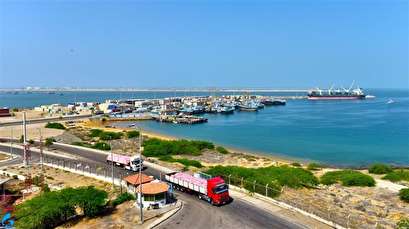 TEHRAN, Young Journalists Club (YJC) -India and Afghanistan have signaled their commitment to the development of Iran’s strategic Chabahar port ahead of a Thursday meeting with the US which is pushing for economic strangulation of Tehran.

“The meeting focused on consolidating economic cooperation, including Chabahar,” the Indian foreign ministry said in a statement.

They also discussed enhancing cooperation on counter-terrorism, counter-narcotics, and continuing support to the peace and reconciliation process that is led and owned by Afghanistan, it added.

Their meeting came ahead of the first ever “2+2” talks between Indian and US foreign and defense ministers in New Delhi on Thursday to discuss issues of strategic and security interest.

Indian officials have said in their talks with the Americans, they would emphasize the importance of Chabahar to economically stabilize Afghanistan. They expect Kabul also to press Washington on giving a waiver to develop Chabahar.

On Monday, a US official said no decision had been made yet on extending exemptions to India for a carve-out in Chabahar.

Alice Wells, principal deputy assistant secretary for the bureau of South and Central Asian affairs, said an “informational conversation” was held in New Delhi last week on Chabahar and the US took it under “advisement”.

Talks on the matter between the two sides were “ongoing” and no decision had been taken on the matter, Wells said.

India hopes to utilize Iran’s transit potentials to embolden its connectivity footprints, with Chabahar being the stepping stone to those ambitions.

For India, the Iranian port is key to access Afghanistan as well as the landlocked Central Asia, the Caucasus and Russia.

In February, Iran signed an agreement to lease the operational control of phase one of Chabahar port to India for 18 months.

Prime Minister Narendra Modi said India also wanted to support the construction of the Chabahar-Zahedan rail link that would transport goods right up to the Afghan border.

"We want to expand connectivity, cooperation in the energy sector and the centuries-old bilateral relationship," he said during a visit to New Delhi by Iran’s President Hassan Rouhani.

US official Wells said Monday that for now, Washington is considering India’s advice even as it expects all countries to reduce their crude oil imports from Iran to zero “as quickly as possible”.

On Wednesday, Russia's Foreign Minister Sergei Lavrov condemned US foreign policy based on imposing sanctions before it enters negotiations.

"In most cases, the United States is not very willing to negotiate," Lavrov said on the sidelines of an economic forum in the Russian city of Vladivostok.

"First, they announce sanctions, then more sanctions, and only after that they open talks," he said, describing current ties between the US and Russia as "the most toxic".

The pattern could also be seen in America's dealings with North Korea, the EU and China, Lavrov said, referring to an escalating US trade war with China and worsening tensions with allies in the European Union.

Last month, Russia came under new US sanctions targeting Moscow's sale of data-x-items or services related to defense, and banning government credit support for any exports to Russia.

India wants the US to extend a waiver for the purchase of S-400 Triumf missile system from Russia.

Wells said US sanctions on Russia were “not intended to adversely impact countries like India,” but was unforthcoming on a waiver.

“There have been no decisions to provide waiver, there certainly aren’t country specific waivers in the legislation and would be on individual case-by-case basis,” she said.