TEHRAN, September 12 -The very existence of Patroclus and Menoetius, a pair of Trojan asteroids, suggests a rearrangement of the giant planets occurred within the solar system's first 100 million years. 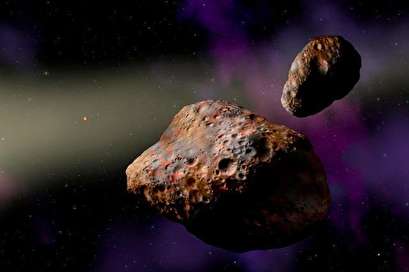 TEHRAN, Young Journalists Club (YJC) -The very existence of Patroclus and Menoetius, a pair of Trojan asteroids, suggests a rearrangement of the giant planets occurred within the solar system's first 100 million years.

Trojan asteroids share Jupiter's orbit around the sun. Patroclus and Menoetius form the only large binary in the group of ancient asteroids.

"The Trojans were likely captured during a dramatic period of dynamic instability when a skirmish between the solar system's giant planets -- Jupiter, Saturn, Uranus and Neptune -- occurred," David Nesvorny, a planetary scientist at the Southwest Research Institute, said in a news release.

According to the latest analysis, the presence of Patroclus and Menoetius suggests this skirmish happened shortly after the formation of the solar system.

"Observations of today's Kuiper Belt show that binaries like these were quite common in ancient times," said William Bottke, director of SwRI's space studies department. "Only a few of them now exist within the orbit of Neptune. The question is how to interpret the survivors."

When the solar system was still in its infancy, small bodies could form pairs as small clouds of pebbles collapsed. As the solar system evolved and became populated by an increasing number of small bodies, binaries like Patroclus and Menoetius were more likely to be disrupted by collisions.

"The longer the binary stayed in the disk, the greater the likelihood that collisions would strip its components from one another," researchers wrote in their new paper, published this week in the journal Nature Astronomy.

The models designed by Bottke, Nesvorny and their colleagues suggest the solar system's early giant planet shakeup helped save Patroclus and Menoetius from certain demise.

Scientists have previously suggested the migration of large planets account for large, 4-million-year-old impact craters on the moon, Mercury and Mars, but the latest findings prove otherwise.

The planetesimal disk from which Patroclus and Menoetius formed, once located beyond Neptune, must have been dispersed within 100 million years after the formation of the solar system.

"This constraint implies that the planetary migration is unrelated to the formation of the youngest lunar basins," scientists wrote.