TEHRAN, September 12 -"This could have implications for a variety of fields where light-matter interactions play a role, including quantum information science and optoelectronic technology," said researcher Sunil Mittal. 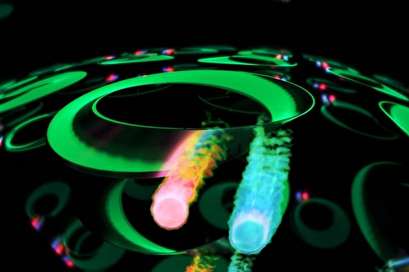 TEHRAN, Young Journalists Club (YJC) -"This could have implications for a variety of fields where light-matter interactions play a role, including quantum information science and optoelectronic technology," said researcher Sunil Mittal.

"Pretty much all of the light we encounter in our everyday lives is packed with photons," Elizabeth Goldschmidt, a research scientist at the Joint Quantum Institute, said in a news release. "But unlike a light bulb, there are some sources that actually emit light, one photon at time, and this can only be described by quantum physics."

As such, scientists continue to look for ways to reliably produce quantum light, with the aim of isolating and manipulating its quantum properties.

To develop a consistent source of quantum light, Goldschmidt and her research partners turned to silicon. When passed through a layer of silicon, infrared laser light is converted into two different colored photons.

For the new chip, researchers used an array of tiny silicon loops. When infrared light passes through the chip, it races around each loop several thousand times before jumping to the next loop. The design effectively prolongs the light's journey through the silicon, allowing the tiny chip to produce lots of photon pairs.

Scientists have deployed similar photon-producing technologies. Often, minuscule defects in silicon materials cause the color of the emitted photons to vary from chip to chip, device to device. Consistency can even be a problem within a single chip's light-converting material.

Goldschmidt and her colleagues addressed this problem by isolating the silicon loops along the edge of the chip. The design tweak minimized the impact of material defects, enabling the production of identical pairs of single photons.

"We initially thought that we would need to be more careful with the design, and that the photons would be more sensitive to our chip's fabrication process," said Sunil Mittal, a postdoctoral researcher at JQI. "But, astonishingly, photons generated in these shielded edge channels are always nearly identical, regardless of how bad the chips are."

The researchers described their breakthrough technology in the journal Nature this week.