TEHRAN, September 12 - The dead bodies of about 1,000 people were not found the in rubble of World Trade Center towers because massive explosives were used to demolish the skyscrapers on September 11, 2001, says Dr. Kevin Barrett, an American academic who has been studying the events of 9/11 since late 2003. 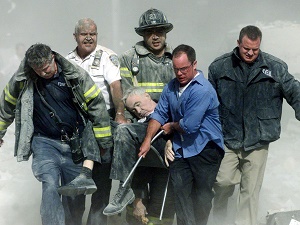 TEHRAN, Young Journalists Club (YJC) -Dr. Barrett, a founding member of the Scientific Panel for the Investigation of 9/11, made the remarks in a phone interview with Press TV on Wednesday while commenting on a report which says the remains of about 1,000 of the victims of the 9/11 attacks could still not be found for DNA testing.

Seventeen years after the 9/11 terrorist attack in New York City, advancement in DNA testing techniques has led to the identification of more victims of the atrocity, according to reports.

The death toll following the collapse of the Twin Towers of the World Trade Center on September 11, 2001 was 2,753, but about 1,000 of the victims are yet to be positively identified.

“We have a major problem here in the United States and throughout the world because people are not putting two and two together and underrating the significance of the fact that these supposed building collapse which we are told that happened due to fire and weakening of the structural field -- more than a thousand people who supposedly simply collapsed due to gravity on top of them, never were indentified per in terms of their remains, that not a single bone fragment or a single nail was ever found of these people,” Dr. Barrett said.

“There have been many building collapses throughout history. Earthquake typically causes all sorts of building collapses and people are dug out from under the remains of the buildings. And in all cases, in many cases people are still alive having suffered horribly, and in many cases people’s bodies are found in the rubble of the collapsed buildings. And in every single case the body is still there, crushed, but still there,” he stated.

“However, anyone who looks at these films of the explosive demolitions of these World Trade Center skyscrapers on September 11, 2001 could see that these buildings are not collapsing. They are exploding. Massive explosive powers (were) being used to blast the entire buildings into talcum powder, that is sub-100 micron dust,” he noted.

“So that’s what happened to the people inside. They were blasted into tiny fragments of powder by the enormous explosive power, and we don’t know the precise details of what types of explosives were used to do this, but we know that it happened.  There were rivers of molten steel flowing in what would left of the Trade Towers after the September 11. Dozens and dozens of witnesses have reported that. Likewise more than 100 witnesses in the fire department and the police department are on record discussing the massive explosives that rocked the Twin Towers. Many of the victims who were actually killed before the planes hit, like the explosions hit the lobby and the lower floor before there any plane hits,” the analyst said.

The 9/11 attacks were a series of strikes in the US which not only killed thousands of people but also caused about $10 billion worth of property and infrastructure damage.

US officials assert that the attacks were carried out by 19 al-Qaeda terrorists – 15 of them were Saudi citizens -- but many experts have raised questions about the official account.

They believe that rogue elements within the US government, such as former Vice President Dick Cheney, orchestrated or at least encouraged the 9/11 attacks in order to accelerate the US war machine and advance the Zionist agenda.

According to American academic James Fetzer, the high number of medical cases related to the September 11 terror attack in New York show that the Twin Towers collapsed because of nukes.

Fetzer, who has extensively researched the 9/11 attacks, has maintained that a series of mini or macro nuclear weapons were used to blow apart the Twin Towers from the top-down on September 11, 2001.