TEHRAN, September 12 -Russia’s Defense Ministry says the foreign-backed Takfiri militants have abducted children from Syria’s Aleppo to use them in a staged chemical weapons attack in Idlib to be blamed on the Syrian government. 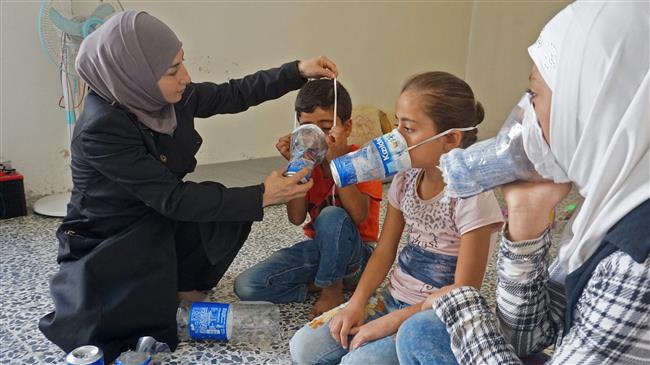 TEHRAN, Young Journalists Club (YJC) -On Wednesday, Syria’s official news agency SANA quoted the defense ministry as saying that the terrorists kidnapped 22 children with their relatives from Aleppo countryside as well as a group of orphans to use them in a false-flag chemical attack.

The ministry added that the militants are planning to use toxic substances made of chlorine against civilians in Idlib.

Last week, Russia’s military said terrorist groups, including Jabhat an-Nusra, and the Western-backed White Helmets “aid group”, which stands accused of working with Takfiri militants, met in Idlib earlier this month to prepare the final scenarios for the false-flag chemical attack which will target the cities of Jisr ash-Shugur, Serakab, Taftanaz and Sarmin.

Syria’s Ambassador to the UN Bashar Ja'afari earlier said that Damascus had already submitted information to the UN Security Council that a false-flag chemical attack in Idlib was being prepared by the terrorists. He said they sought to lay the blame on the Syrian government to provoke a Western attack.

Speaking in an exclusive interview with English-language al-Hayat magazine published on Tuesday, Muallem said it was not the first time that chemical attack claims had been used to justify an attack on Syria.

Syria surrendered its entire chemical stockpile in 2013 to a mission led by the Organization for the Prohibition of Chemical Weapons (OPCW) and the UN.