TEHRAN, September 12 - At least seven people have lost their lives and 30 others sustained injuries when a powerful car bomb explosion struck a main road in Iraq's north-central province of Salahuddin. 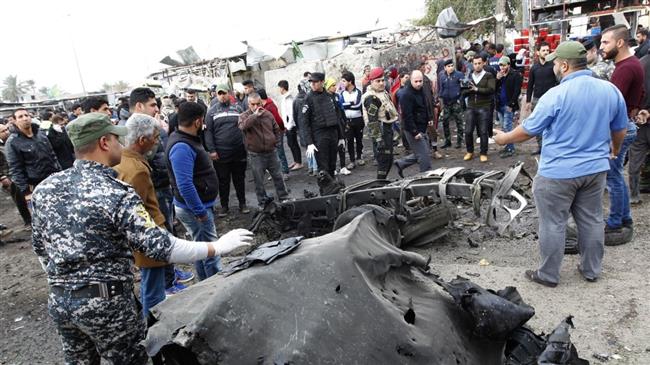 TEHRAN, Young Journalists Club (YJC) -Provincial police source Mohammed al-Bazi said the blast took place at around noon on Wednesday, when a booby-trapped car parked in front of a restaurant frequently visited by passengers while travelling on the main road north of the provincial capital city of Tikrit, located 140 kilometers (87 miles) northwest of Baghdad, went off.

Bazi added the massive explosion set seven nearby civilian cars ablaze and badly damaged several others. It destroyed large part of the restaurant as well.

No group has so far claimed responsibility for the attack, but the Daesh Takfiri militant group has been responsible for such attacks in most cases, targeting markets, cafes and mosques across Iraq.

Iraqi Prime Minister Haider al-Abadi, who is also the commander-in-chief of Iraqi forces, pledged on June 30 to hunt down Daesh terrorists across Iraq after a series of attacks and abductions carried out by the terrorist group.

On July 10 that year, the Iraqi prime minister had formally declared victory over Daesh in Mosul, which served as the terrorists’ main urban stronghold in the conflict-ridden Arab country.

Iraqi forces took control of eastern Mosul in January 2017 after 100 days of fighting, and launched the battle in the west on February 19 last year.