TEHRAN, September 13 - Authorities in Britain have rejected claims by two Russians suspected of poisoning a double spy in March in the English town of Salisbury, repeating their previous statements that the pair were Moscow’s agents and had carried out the attack on Sergei Skripal and his daughter. 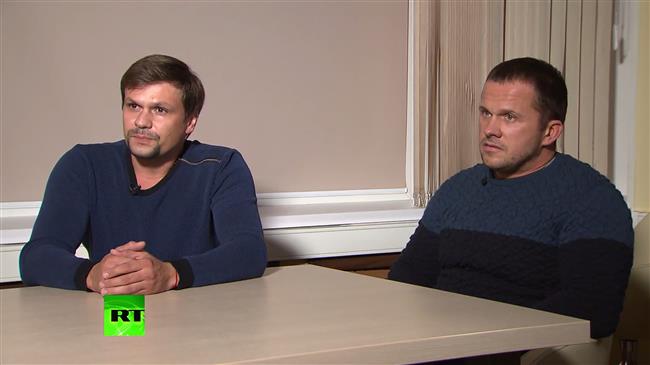 TEHRAN, Young Journalists Club (YJC) - A UK government spokesperson said Thursday that the two men’s interview with a Russian state TV in which they claimed they had been in Salisbury earlier this year only for tourism was simply not true.

“The government is clear these men are officers of the Russian military intelligence service - the GRU - who used a devastatingly toxic, illegal chemical weapon on the streets of our country,” said the spokesperson.

“Today ... they have responded with obfuscation and lies.”

The remarks came after Alexander Petrov and Ruslan Borishov appeared on the RT news channel and said they had been wrongly accused by Britain and had been visiting Salisbury for tourism.

The two, who have been charged by British prosecutors for the attempted murder of the Skripals and a police officer who tried to help them, say they traveled to Salisbury to see the city’s world-renowned monuments, including its famous cathedral.

“Our friends had been suggesting for a long time that we visit this wonderful town,” Petrov said in the RT interview, while Boshirov added, “There’s the famous Salisbury cathedral. It’s famous not only in Europe, but in the whole world.”

The British lawmaker who represents Salisbury in the British Parliament said that the two were not telling the truth about their trip.

“Salisbury welcomes tourists from around the world and is very much open for business,” said John Glen, the Member of Parliament for Salisbury and a government minister, in a tweet on Thursday.

“But the Petrov/Borishov statements are not credible and don’t match the widely accepted intelligence we have on these individuals,” he added.