TEHRAN, September 14 - Prime Minister Shinzo Abe on Friday repeated Japan's stance that a row over islands seized by Russian troops in the final days of World War Two must be settled before a peace treaty can be signed to formally end hostilities between their countries. 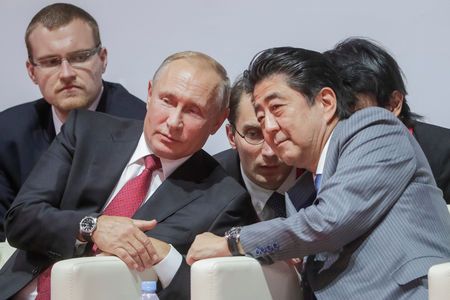 TEHRAN, Young Journalists Club (YJC) - Putin appeared to catch Abe off guard when he said at a regional forum in Vladivostok on Wednesday that the two countries should sign a peace treaty by the end of this year - without preconditions.

"We need to read the signals from various comments President Putin has made. It is true that he proposed to work properly on a peace treaty. Of course, Japan's stance is to resolve the territorial dispute and then conclude a peace treaty," Abe said during a televised debate with his rival for a Sept. 20 ruling party leadership election.

"I said so before and after the comment (from President Putin), and President Putin has made a response. But I cannot talk about it because we are in the middle of negotiations... What I can say is that I believe a summit meeting in November or December will be an important one," Abe added.

The two leaders are likely to meet at one or both of two regional summits later this year.

Both Moscow and Tokyo claim sovereignty over the islands, known in Russia as the Kurile islands and in Japan as the Northern Territories. Abe has made resolving the feud a key plank of his political platform.

Experts said, however, that Putin's suggestion would be hard for Japan to swallow since in effect it means abandoning its claims to the Russian-controlled islands.

It was questionable whether Putin really wanted to resolve the issue, said James Brown, a political science professor at Temple University's Japan campus.

"Since the Japanese government cannot accept the proposal without abandoning its claim ... it has no choice but to reject it," Brown wrote in a column in the English-language Japan Times. "This makes Japan look like the obstacle to a peace treaty.