TEHRAN, September 14 - Hungary has contemplated taking legal action against the European Union after it voted for initiating disciplinary proceeding against Budapest. 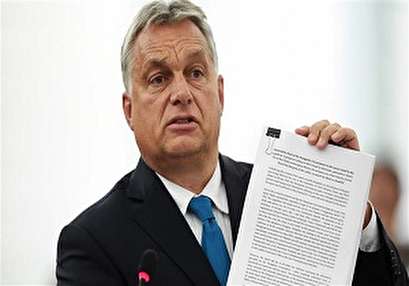 TEHRAN, Young Journalists Club (YJC) - The majority of members of the EU parliament believe the ruling rightwing government in Hungary is posing a "systemic threat" to the EU's founding values.

The European Parliament, this week, with 448 votes for to 197 against and with 48 abstentions, voted in favor of initiating Article 7 disciplinary proceedings against the east European country.

Article 7, known by some as the "nuclear option," would take away Hungary’s EU voting rights and demote the country to a non-voting member of the EU.

Hungarian Prime Minister Viktor Orbán said on Friday that his government would consider launching a legal challenge against the European Union.

“In today’s European Parliament, there is a clear pro-migration majority,” the prime minister said, adding that MEPs are trying to change the composition of Europe’s population. “We need a new European Parliament and another future,” he said, while accusing the EU of financially supporting NGOs.

The Hungarian prime minister also lashed out at German Chancellor Angela Merkel. He accused Merkel of trying to undermine the country’s ability to defend its own borders using local troops. Merkel has called for the EU states to strengthen their borders by boositng the European Border and Coast Guard Agency, also known as Frontex.

“So the plan is that if Hungary cannot be forced to let in migrants, then it must be stripped of its right to protect its borders,” Orbán said, accusing the bloc of wanting to “send mercenaries” to his country in order “to take away” the power of “Hungarian sons” to protect the country’s borders.

Hungary, along with Poland and the Czech Republic, have been opposed to EU's refugee policy.

Despite repeated warnings by the EU, the three countries continue to pursue a course of non-compliance, arguing that refugees pose a threat to their security.