TEHRAN, September 14 - Yemeni army forces, supported by allied fighters from Popular Committees, have fired a domestically-designed and -developed ballistic missile at a strategic economic target in Saudi Arabia’s southwestern border region of Jizan in retaliation for the Riyadh regime’s devastating military aggression against their impoverished country. 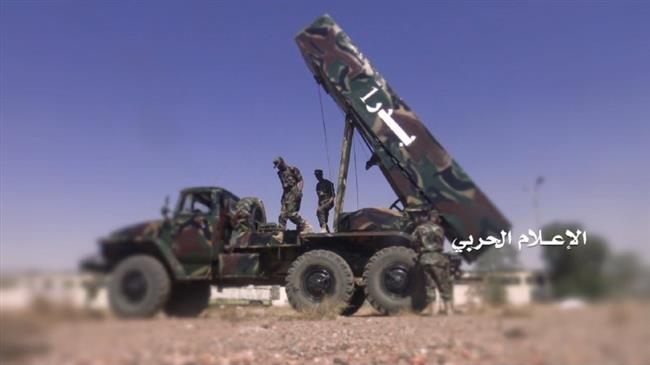 Earlier in the day, Yemeni troopers and their allies had attacked a command center of Emirati military forces in the country’s western coastal province of Hudaydah, using a domestically-built long-endurance unmanned aerial vehicle.

There were no immediate reports about possible casualties and the extent of damage caused at the site.

An official of Provincial Supreme Security Committee, who asked to remain anonymous, said, "The Saudi-led helicopter crashed while conducting a reconnaissance mission over Tanhala Mountains."

He confirmed that the Saudi pilot and his assistant died as a result of the helicopter crash caused by unknown reasons.

Later in the day, Saudi fighter jets struck Yemeni fishing boats in waters off the Seven Brothers Islands, also known as the Sawabi Islands or Seba Islands, in the Bab el-Mandeb Strait, killing two people and injuring another.

Yemeni sources say the fate of the fourth fisherman remains unknown after the airstrike.

Saudi Arabia and a number of its regional allies launched a devastating military campaign against Yemen in March 2015, with the aim of bringing the government of former president Abd Rabbuh Mansur Hadi back to power and crushing the country’s Houthi Ansarullah movement.