TEHRAN, September 15 -At least 15 people have lost their lives in fresh air raids conducted by Saudi warplanes on a strategic road linking the Yemeni port city of Hudaydah to the capital, Sana'a. 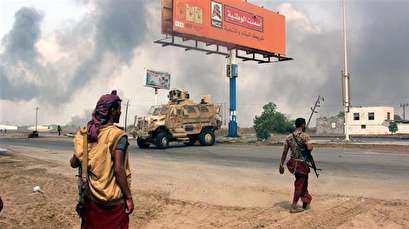 TEHRAN, Young Journalists Club (YJC) -At least 15 people have lost their lives in fresh air raids conducted by Saudi warplanes on a strategic road linking the Yemeni port city of Hudaydah to the capital, Sana'a.

The al-Masirah television network affiliated to Yemen's Houthi Ansarullah movement reported that more than 20 people had also been injured in the aerial assaults on the Kilo 16 highway.

Over the past few days, fighting has intensified between Houthi fighters and Saudi-backed militants loyal to former Yemeni President Abd Rabbuh Mansur Hadi around the critical highway, through which humanitarian aid is delivered to the Yemeni people.

"What we are seeing with the fighting is [that] the critical junction at Kilo 16 is the artery towards Sana'a and other parts of the country," she told Al Jazeera.

Backed by Saudi airstrikes, Emirati forces and pro-Hadi elements launched the Hudaydah offensive on June 13 despite international warnings that it would compound the impoverished nation’s humanitarian crisis.

Saudi Arabia claims that the Houthis are using Hudaydah for weapons delivery, an allegation rejected by the fighters.

"The main road was blocked and there are some by-streets, but they are not safe to go through because airstrikes target any car in those streets,” he told the Middle East Eye news portal.

He said pro-Hadi militants had advanced towards Hudaydah while Houthi reinforcements had arrived from the north and other parts of the city.

Mohammed al-Boukhaiti, a Hudaydah-based member of the Houthi political council, said Yemeni fighters were still in control of the Hudaydah-Sana'a highway.

"The Yemeni army confronted the attack of the coalition and today Kilo 16 is under the control of the army, but it is not safe for passengers because the airstrikes target them," he said.

Saudi Arabia and its allies launched a brutal war, code-named Operation Decisive Storm, against Yemen in March 2015 in an attempt to reinstall Hadi, a staunch ally of Riyadh, and crush the Houthis.

The Western-backed offensive initially consisted of a bombing campaign, but was later coupled with a naval blockade and the deployment of ground forces into Yemen.

In another development, UN Special Envoy for Yemen Martin Griffiths held talks with a Houthi delegation, led by spokesman Mohammed Abdulsalam, in the Omani capital, Muscat.

During the meeting, Griffiths was briefed on the Houthis' reasons for their absence from the latest round of the peace talks in the Swiss city of Geneva, Yemen's official SABA news agency reported.

The Geneva peace talks failed after Saudi Arabia prevented the Houthi delegation from joining the Geneva talks, giving representatives of the Hadi administration to leave the Swiss city.

The last round of Yemen talks were held in Kuwait in 2016 but they collapsed after the Saudi-backed delegation also left them.