TEHRAN, September 16 - Many Yemeni families reportedly have nothing to eat but leaves as a humanitarian crisis caused by Saudi Arabia's deadly bombing campaign on the impoverished state reaches a critical stage. 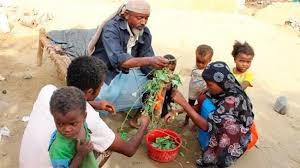 TEHRAN, Young Journalists Club (YJC) - The Associated Press reported that people in the Aslam district of Yemen's northwestern Hajjah Province rely on leaves from the local vine, known as Halas in Arabic or Arabian Wax Leaf in English, due to worsening hunger.

Mothers, the report said, pick the leaves, then wash and boil them into a sour, acidic green paste to stave off starvation.

According to local health figures, Aslam recorded one of Hajjah’s highest jumps in the number of malnourished children, from 384 cases being treated in January, an additional 1,319 more came in over the next six months.

“Aslam is just another picture of Somalia,” said Saleh al Faqih, a worker in a mobile Health Ministry clinic.

In the village of al-Mashrada, situated near Aslam, the mother of a 7-month-old girl, Zahra, is undernourished herself and is often unable to breastfeed her child.

“Since the day she was born, I have not had the money to buy her milk or buy her medicine,” said the mother who feeds her whole family with Halas mush.

“We are in the 21st century, but this is what the war did to us,” said Mekkiya Mahdi, the Aslam health center chief.

At least 20 children are known to have died of starvation this year in Hajjah.

Walid al-Shamshan, head of the Health Ministry’s nutrition section in Hajjah, said the province had seen 17,000 cases of severe acute malnutrition in the first six months of 2018, higher than in any full year on record.

Saudi Arabia and its allies launched a brutal war, code-named Operation Decisive Storm, against Yemen in March 2015 in an attempt to reinstall former president Abd Rabbuh Mansur Hadi, a staunch ally of Riyadh, and crush Houthis.

The Western-backed offensive initially consisted of a bombing campaign, but was later coupled with a naval blockade and the deployment of ground forces into Yemen.

The blockade on Yemen has smothered humanitarian deliveries of food and medicine to the import-dependent country.

An estimated 8.4 million Yemenis are on the verge of starvation while almost 18 million lack access to good, nutritious food.