TEHRAN, September 16 -For climate scientists, the poles are ground zero. Around the North and South poles, climate change is happening faster and more dramatically. 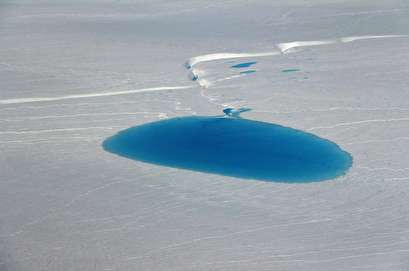 To better understand how the entirety of Earth's climate will change as the planet warms, scientists need to resolve the many mysteries of polar climate change. NASA's newest ICE mission satellite, ICESat-2 -- scheduled to launch into space on Saturday morning -- will help scientists do just that.

Many of those mysteries are related to changes in sea ice coverage.

NASA and other space and weather agencies have been measuring the movement and thickness of ice for a couple decades, but the instruments they've relied on are relatively blunt compared to ICESat-2.

The original ICE satellite used a single laser with a limited footprint. ICESat-2 boasts six lasers. The lasers are faster and more precise.

"The footprints of each beam are overlapping," Wagner said. "The rep rate is like 10,000 shots per second."

By recording how long it takes for each laser pulse to hit the ice and bounce back, ICESat-2 will be able to measure the height of Earth's features with unprecedented precision.

The data will help scientists track the changing thickness of polar sea ice, as well as ice features on land, like ice sheets and glaciers. Scientists will be able to use ICESat-2 data to track both seasonal and long-term changes by comparing the new data to measurements recorded in the past.

When sea ice melts, there is no immediate impact on the sea level. But sea ice effects a variety of polar dynamics. For example, sea ice works like a mirror, reflecting the sun's rays and slowing warming. As the sea ice disappears, the break on warming is released.

The extent and thickness of sea ice also affects the movement of ocean currents, which impact important interactions between ocean, ice and atmosphere.

"Sea ice is much more reflective than the surrounding ocean water, so the changes in sea ice extent and thickness really regulates weather in the arctic, which in turn affects weather patterns globally," Tom Neumann, ICESat-2's deputy project scientist, told UPI. "With better measurements of sea ice thickness, we should be in a much better position to understand and quantify how changes in sea ice impact weather patterns."

"A lot of climate processes are happening on decadal timescales, so we try to combine all these records together," Wagner said. "ICESat-2 will help us do that."

The forthcoming ICESat-2 data will serve as more than just a comparison to previous sea ice measurements. Scientists will be able to combine the new ice-related data with measurements captured by a variety of other satellite an instruments, helping scientists uncover hidden relationships between ice and other ocean and atmospheric phenomena -- wind, current, temperature, precipitation and more.

Last month, scientists published research showing warmth has accumulated deep in the Arctic interior. Researchers think the warmth was propelled by winds and currents over the last several decades.

"As you have more exposed ocean water and thinner ice, you have more warmth being absorbed by the ocean surface," Wagner said. "The question is, does that warmth move to greater depths."

Data collected by ICESat-2 will help scientists understand how sea ice patterns affect the ability of warm water to penetrate deeper into the polar interiors. In Antarctica and Greenland, scientists are concerned that the penetration of warmer ocean water could undermine the structural integrity of glaciers and massive ice sheets.

Though ICESat-2's main focus will be ice, both sea and land ice, the satellite's lasers will also measure the height of the ocean and land, helping scientists plot sea levels and weight height, as well as the height of forest canopies.

The data could inspire a plethora and scientific revelations.

"NASA data is available to the public as soon as we are able to quality control that data. Our data center is the National Snow and Ice Data Center out in Boulder, Colorado," Neumann said. "We expect to have our first data products available right around the end of the calendar year if all goes well. But the data is free to all as soon as it is posted."