TEHRAN, September 17 - The commander of the Iranian Army’s ground forces says nothing threatens the Islamic Republic, but the Armed Forces are ready to deliver the enemies a “strong blow on the mouth.” 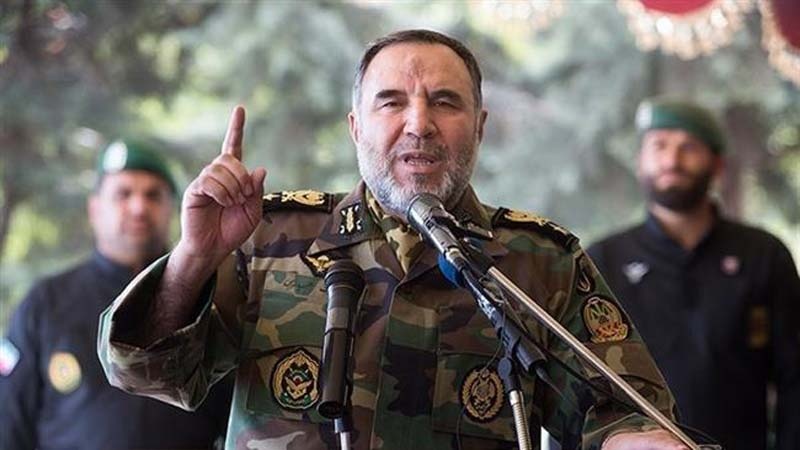 TEHRAN, Young Journalists Club (YJC) - “I assure the Iranian people that no danger threatens the country, and that the country is not on the brink of war,” Brigadier General Kioumars Haydari said in the western Hamadan Province on Sunday, IRNA reported.

"This, of course, does not mean neglecting the principle of readiness because, as stated by the commander-in-chief and Leader of the Islamic Revolution [Ayatollah Seyyed Ali Khamenei], the Armed Forces must always feel themselves in the trenches," he added.

Haydari hailed the Army’s defensive and combat readiness, saying it had reached such a level that "those claiming hostility with Iran have now resorted to non-military machinations."

"The change in the methods of the enemies to confront Iran stems from the presence, persistence and, in particular, the realization of the principle of standing on their own feet in the Armed Forces," he said.

The Army's ground forces, he said, produce 100 percent of their defense equipment or use the equipment produced by the Ministry of Defense and other armed forces, adding they do not have any reliance on foreign countries.

"Given that we have achieved this position, we can give the enemies a strong blow on the mouth," he said.

"The Iranian Army resolutely announces that it is ready, along with other Armed Forces, to seal the fate of any threat in the shortest possible time," the commander added.

On Thursday, a top commander of Iran's Islamic Revolution Guards Corps (IRGC) said a US war against Iran was no longer a possibility because Washington lacked the political means and international support to launch a new military campaign.

Washington knows that "it will be on the losing side if it ever starts a war with Iran," Brigadier General Hossein Salami, the IRGC’s second-in-command, said.

"The US military is incapable of engaging us in a battle and the American economy wouldn't be able to support the war either," Salami added.