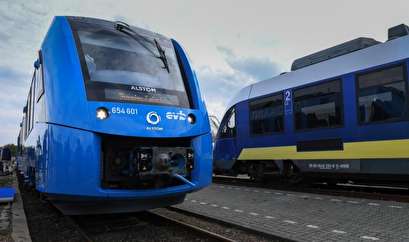 The Coradia iLint, built by French manufacturer Alstom, arrived to its station in Bremervörde and will run a regular schedule in the Lower Saxony region.

The train can reach speeds of 140 km per hour by using fuel cells that can convert hydrogen and oxygen into electricity. The train itself is emission-free, but the production of hydrogen does release some emissions.

"This is a revolution for Alstom and for the future of mobility. The world's first hydrogen fuel cell train is entering passenger service and is ready for serial production," Henri Poupart-Lafarge, the chairman and CEO of Alstom, said in a statement. "The Coradia iLint heralds a new era in emission-free rail transport. It is an innovation that results from French-German teamwork and exemplifies successful cross-border cooperation."

This is the first of several hydrogen fuel cell trains that will be operating in the region.

In November 2017, Alstom signed a contract with the local transport authority of Lower Saxony to deliver 14 hydrogen fuel cell trains and provide 30 years of maintenance and energy supply.