TEHRAN, September 17 - Turkey’s military has reportedly deployed its most significant batch of reinforcements to Syria’s northwestern province of Idlib in weeks, as Ankara strives to prevent a full-scale offensive by the Syrian government against thousands of terrorists in the militant-held region. 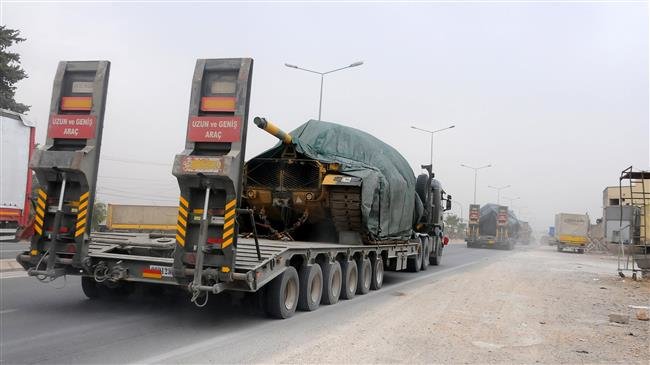 TEHRAN, Young Journalists Club (YJC) - According to a report by the Hurriyet Daily News website on Monday, reinforcements, which were dispatched a day earlier, included tanks and other military hardware along with a convoy of around 50 military vehicles.

It added that they had been sent over the border to one of the two observation posts operated by Turkey in the vicinity of Jisr al-Shughour city in the southwestern parts of the flashpoint province.

Under a deal agreed with Russia, Turkey has already established a dozen so-called observation points inside the province purportedly aimed at monitoring a de-escalation of violence.

The reinforcements were the latest move in recent days by the Turkish military to shore up one of its points, described by the report as the most significant sent in the current spike of in tensions between Damascus, that is resolved to flush out terrorist factions in the province, and Ankara, which is fearful of a potential flow of displaced people towards its borders in case of an anti-terror offensive.

“The people who leave are going to come to Turkey. They are not going to go to Iran, Iraq, Russia, Germany or France. This is why they must help Turkey and share the burden,” said Turkish President Recep Tayyip Erdogan earlier in the day, warning that the consequences of an offensive on Idlib would be “heavy.”

Furthermore, Turkey tries to maintain a foothold in Idlib, which is home to an estimated three million Syrian people, in an alleged attempt to play a role in shaping Syria’s postwar politics and rebuilding its shattered economy.

The volatile region is also home to an estimated 10,000 to 15,000 members of armed groups that Russia, Turkey and the United States consider terrorists. However, Turkey supports tens of thousands of other militants, describing them as members of the so-called “moderate” armed factions, fighting against the government of Syrian President Bashar al-Assad. Damascus and Moscow brand all of the armed factions in the region as terrorists.

The Turkish government has been trying to persuade its loyal armed groups to evacuate Idlib in a purported bid to avert the anti-terror operation. However, Ankara has not said how it would persuade them to disarm. Previous attempts have failed and the looming offensive is causing frictions among militants.

Both Syria and Russia, a close ally of the Arab country, have already submitted proofs and evidence to the United Nations and the Organization for the Prohibition of Chemical Weapons (OPCW) showing that the Hayat Tahrir al-Sham outfit in Idlib are preparing to set up another false-flag chemical attack to frame Damascus and pave the way for the US-led coalition to attack Syrian government troops.