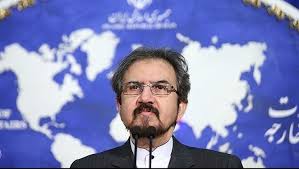 TEHRAN, Young Journalists Club (YJC) - “This report is an absurd lie which is rejected,” Qassemi told reporters during his weekly press conference in Tehran on Monday, referring to a report by the Arabic-language Kuwaiti daily newspaper al-Jarida, claiming that Major General Qassem Soleimani met with American Special Presidential Envoy for the Global Coalition to Defeat Daesh Brett McGurk in Iraq last Tuesday.

The media outlet (al-Jarida) has repeatedly published fake news about Iran, he said, adding that without having any office in Iran, it refers to its office in Iran as the source of its reports.

The US embassy in Iraq has also denied the validity of the news and confirmed that such information is totally misleading.

“The US Embassy has noticed the circulation of wrong media reports about a meeting between special presidential envoy Brett McGurk and an Iranian general to discuss the formation of the new Iraqi government. Such news is baseless, and there has never been such a meeting,” US Embassy Spokesman Charles Cole said in a statement on Saturday.

Iraq has been facing the threat of terrorism in recent years, mainly posed by the Daesh (ISIL or ISIS) terrorist group.