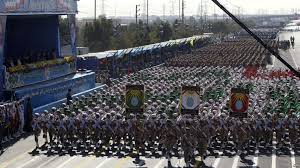 TEHRAN, Young Journalists Club (YJC) - Head of the IRGC Public Relations Department General Ramezan Sharif said the parades will be held across the country on the occasion of the beginning of the Sacred Defense Week, which marks the onset of the Iraqi imposed war on Iran in the 1980s.

He further said military units and about 600 vessels of the IRGC and the Army as well as the Law Enforcement Force will join one of the massive events in the southern port city of Bandar Abbas.

The IRGC spokesman went on to say that 200 civil vessels will also participate in the parades in Bandar Abbas, which will begin on Saturday morning with a speech by Iranian Parliament Speaker Ali Larijani.

Simultaneously, a large-scale military parade will be held by the Army in the capital, Tehran.

The most recent achievements of the Iranian Armed Forces in missile industry, equipment for the ground, naval and air defense forces as well as communication gear will be put on display in the military event.