TEHRAN, September 21 - Venezuela's President Nicolas Maduro said on Thursday that 34 supermarket managers had been jailed on charges of hiding food and gouging prices. 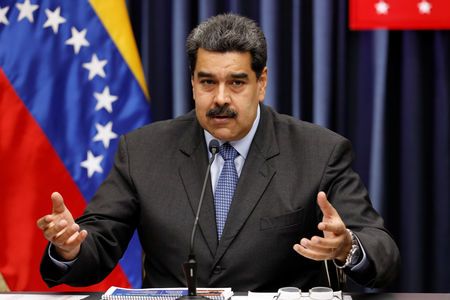 TEHRAN, Young Journalists Club (YJC) - "We had a group of supermarkets that hid the products from people and started to charge them whatever they wanted. There are 34 managers of big supermarkets behind bars for violating the law," Maduro said, often angry during an hour-long televised broadcast on state television.

"I say one thing and the supermarkets come along and say another... What excuse do they have to not follow the rules?" said Maduro, urging Venezuelans to speak up if they see unfair prices to avoid "getting robbed."

Last month, Maduro vowed an economic renewal for the oil-rich country, which is suffering from hyperinflation and shortages of basic goods, ordering a 60-fold salary hike and devaluing the currency by 96 percent.

His government said it would cover salaries for the first three months so that businesses would not increase prices despite the opposition-led congress estimating annual inflation at 200,000 percent.

Local media have reported that many of the arrested managers worked at Central Madeirense, a chain founded some 70 years ago by Portuguese immigrants. The company and Venezuela's Information Ministry did not respond to requests for comment.

Some shop owners, doubtful that the government would ever cover the new wages, tried to balance the books by hiking prices and firing employees, adding to a mass exodus that has already seen over 2 million people flee the country of 30 million, Reuters reported.