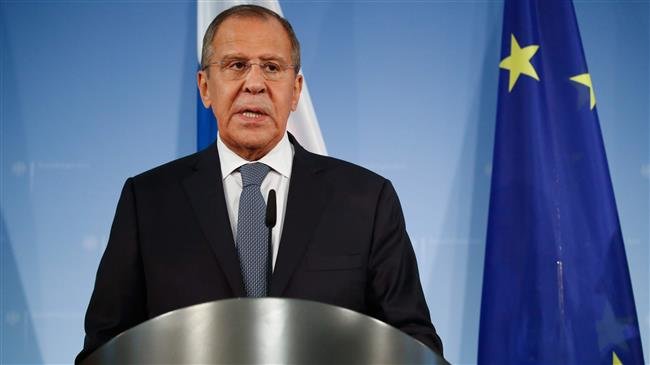 TEHRAN, Young Journalists Club (YJC) - The United States and its allies have been involved in airstrikes on Syria since 2014, claiming they seek to root out the Daesh Takfiri terrorists. The strikes have had no approval from the Syrian government or a mandate from the United Nations.

The US and its allies have defied the Damascus government’s call to leave Syrian soil despite the collapse of the Takfiri terror group late last year.

Russia and Iran have been both assisting Syria in its counter-terrorism offensive and mediating, together with Turkey, a diplomatic process to help restore calm to the Arab country.

Lavrov said on Friday that Moscow and Ankara had agreed on the borders of a demilitarized buffer zone to separate Syrian government forces from Takfiri militant groups in the northwestern province of Idlib and that terrorists of Jabhat Fateh al-Sham, formerly known as al-Nusra Front, should leave the zone by mid-October.

'Russia taking steps to lower dependence on US'

Addressing Washington's sanctions imposed against Moscow, Lavrov said his country was working on ways to lower its dependence on the US and the dollar system.

"We are already drawing conclusions, doing all necessary not to depend on those countries that are acting that way with their international partners," Interfax news agency cited Lavrov as saying during a visit to Sarajevo, the capital of Bosnia and Herzegovina, on Friday.

Lavrov said the new sanctions undermined global trust in the US dollar.

His remarks come a day after the United States slapped sanctions on a Chinese military agency for buying defense equipment from Russia in breach of a sweeping US sanctions law targeting Moscow for its alleged meddling in the 2016 US election, which Russia denies.

The US has already introduced several rounds of sanctions against the government of President Vladimir Putin for what it calls Russia’s meddling in the US democratic process and its involvement in the Ukraine conflict.

On August 22, Washington further imposed sanctions on two Russians, one Russian company and one Slovakian company for aiding another Russian firm in avoiding sanctions over the country’s alleged cyber-related activities.

The US on August 21 also imposed sanctions on two Russian shipping companies and six ships over claims of transferring refined petroleum products to North Korean vessels.

On August 8, the White House announced its new rounds of sanctions, including restrictions on trade and diplomatic ties, against Moscow in connection with an alleged poison attack on former Russian intelligence officer Sergei Skripal and his daughter Yulia in the British city of Salisbury back in March. The UK and its allies, including the US, accused Moscow of masterminding and orchestrating the attack.

Russia has since repeatedly denied any role in the incident, offering its assistance to Britain in the investigation. However, London has refused to provide information on the case, including any evidence on purported Russian interference.