Anti-Muslim insults were found on the walls of a mosque in northern Israel on Sunday, a police spokeswoman said. 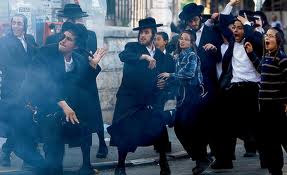 "Insults against Islam... were found on Sunday morning on the walls of a mosque in Baqa al-Gharbiyeh," she said.

The spokeswoman also said several nearby cars had their windscreens smashed and an inquiry was launched to determine if the cases were connected.

Israel and the West Bank have seen a wave of "price tag" attacks, a euphemism for hate crimes by Jewish extremists which often involve vandalism and in some cases physical injury.

Such attacks initially targeted Palestinians in retaliation for state moves to dismantle unauthorised settlement outposts in the West Bank, but later became a standard response after any anti-Israeli violence.
AFP
Share to
Tags
Jewish ، extremists ، muslims ، insult
Your Comment