TEHRAN, September 23 - Syrian government forces have intercepted and targeted an unmanned aerial vehicle as it was flying in the skies over the western coastal province of Latakia, where Russia has an air base and from which its fighter jets conduct airstrikes against Daesh terrorists and foreign-sponsored Takfiri militants in the conflict-plagued Arab country. 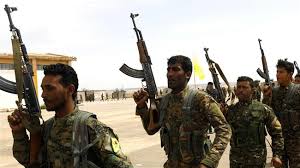 The sources added that members of the Jabhat Fateh al-Sham, formerly known as al-Nusra Front, Takfiri terrorist group had launched the unmanned aerial vehicle from the neighboring militant-held Idlib province.

The development came only two days after a militant drone attack left eight Syrian soldiers injured in the northern part of Latakia province.

The Russian Reconciliation Center for Syria said the assault was launched by a group of foreign-backed militants, based in the city of Jisr al-Shughur, against a group of Syrian troopers near the town of Qala'at Marza.

Syria’s official news agency SANA reported that Syrian soldiers and their allies fortified their positions in the al-Safa hills, and carried out a counter-terrorism operation in the area. Scores of Daesh extremists were killed and injured in the process.