TEHRAN, September 23 - Anti-Brexit protesters calling for a new referendum on Britain's exit from the EU marched through Liverpool on Sunday, as the country's opposition Labour Party held its annual conference in the city. 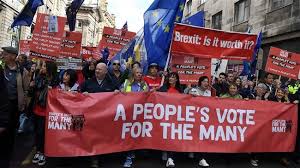 TEHRAN, Young Journalists Club (YJC) -Earlier in the day, opposition leader Jeremy Corbyn said he would prefer a general election to a second vote. Corbyn has so far resisted calls to back a "People's Vote", or new referendum on the decision to quit the EU.

On Sunday he told the BBC's Andrew Marr show that while he would listen to a debate about any possible second vote on Britain's membership, he preferred a snap election if May failed to get a deal that Labour could support in parliament. Britain is to exit the EU in March next year.